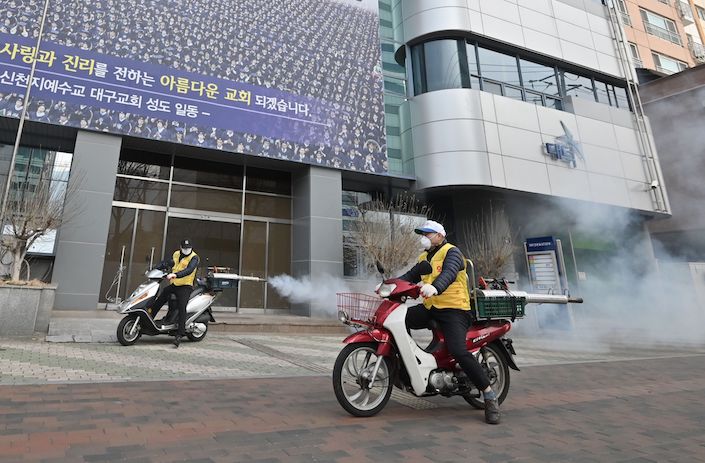 South Korean health officials spray disinfectant in front of the Daegu branch of the Shincheonji Church of Jesus in the southeastern city of Daegu on February 21. Photo: Bloomberg

(Bloomberg) — The number of Covid-19 cases in South Korea have climbed past 200. Tallies for Singapore and Japan have topped 85. And then there are the 600-plus from a quarantined cruise ship in Japan.

While China still accounts for the vast majority of coronavirus cases and deaths, there are now signs that infections are spreading more rapidly in other Asian countries. Anxiety is creeping into financial markets as investors weigh the impact of a wider regional outbreak on economic growth and corporate earnings.

“The sudden jump in infections in other parts of Asia ― notably in Japan and South Korea ― has sparked renewed concerns,” said Khoon Goh, Singapore-based head of Asia research at Australia & New Zealand Banking Group Ltd. “This points to a new phase in the outbreak, and one which will see continued disruption and more economic impact than previously thought.”

The epidemic that emerged in December and infected more than 75,000 people in China has yet to become a pandemic — defined as the virus spreading across multiple continents. So far, the numbers outside China remain comparatively small. Of 2,247 deaths, only 11 have occurred in other regions. Yet there’s been a marked uptick in the number of non-China cases this week.

Infections in South Korea doubled in 24 hours, with the surge tied to a cluster from a religious sect in Daegu. Most of the patients are among those who may have attended church services with a person who was confirmed with the virus earlier this week.

More alarming is the situation in Japan, which has emerged as one of the riskiest places outside China for the spread of the virus. Health Minister Katsunobu Kato said Sunday that Japan had lost track of the route of some of the infections, which tripled in the past week to more than 90.

Japan, slated to host the summer Olympics starting in July, is recording cases in multiple, unconnected areas across the country, and authorities have been struggling to figure out where they’re coming from. The government is being faulted for being too slow to bar visitors from China and too lax in its 14-day quarantine of the Diamond Princess cruise ship, the vessel with 3,700 passengers and crew that’s been under a global spotlight.

At least 636 of those passengers have been infected by the virus, and two have died.

The situation has the potential to escalate given the presence of risk factors like Japan’s elderly population and a societal work ethic that often frowns on taking a sick day. The U.S. Centers for Disease Control and Prevention has issued a Level 1 alert for Japan, which doesn’t discourage travel to the country but urges caution.

To be sure, Japan’s advanced health-care system puts it in a better position to fight the outbreak than poorer states with fewer resources like China’s neighbor North Korea and countries in sub-Saharan Africa.

Asian cities where strict containment measures have been put in place are making progress. The Chinese-controlled territory of Macau, the world’s biggest gambling hub, hasn’t reported a new infection in more than two weeks as casinos were shut and travel to the mainland was restricted.

While Singapore has more than 80 cases, the rate of new infections has been steady, and 37 patients have recovered.

Hong Kong similarly hasn’t seen a surge. That could change, however, with the case of a police officer infected with the virus. He had a meal with 59 other officers, who are now in quarantine.

Some say the Diamond Princess could be a powder keg as more than 1,000 quarantined passengers leave the ship by the end of Friday. With people aboard hailing from more than 50 nations and now returning home, their travels could spawn a fresh wave of global infections. Two people evacuated to Australia tested positive Friday for the virus.

“It’s entirely possible to get tested, be negative and get on an airplane and be positive once you land,” said Keiji Fukuda, the director of the School of Public Health at Hong Kong University and a former World Health Organization (WHO) official who has led responses to outbreaks. “That’s just how infections work.”

Tedros Adhanom Ghebreyesus, the head of the United Nations’ WHO, said Thursday that the world has a chance to contain the virus because the number of cases outside of China has been relatively limited. The risk is that if countries aren’t aggressive enough now to stop the spread, a second epicenter of the outbreak could emerge.

“We need to use the window of opportunity we have to hammer the outbreak in every country,” the WHO director-general said at a briefing in Geneva. Tedros said it’s surprising that donations have been limited after his call for $675 million in funding.