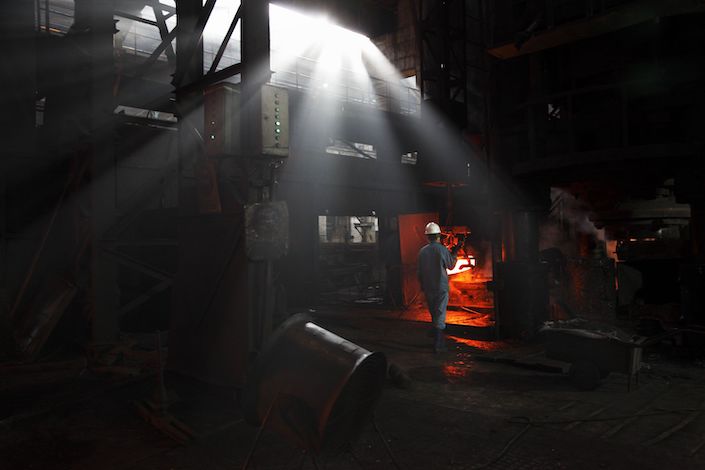 Workers operate on the old assembly line that was built in the 1960s to make train carriage wheels at Ma Steel in Maanshan. Photo: Bloomberg

(Bloomberg) — The world’s largest steel industry just sent out another warning flare as producers grapple with the coronavirus outbreak: nationwide stockpiles of reinforcement bar have swelled to the most on record.

The surge is a reflection of the dislocation caused by the disease and efforts to fight it. Rebar, as it’s popularly known, is used in construction and with many projects now on hold or moving slowly, demand has wilted.

“Steel demand is expected to decline more than production and hence steel inventories were expected to increase significantly more than normal in the first quarter,” Citigroup Inc. said in a note.

China’s mammoth steel sector — which accounts for more than half of global production — is in turmoil because of the outbreak, hit by transport curbs, worker shortages and a slide in demand. Given the challenges, mills have been reining in output, although there are limits to how much they can cut without shutting down furnaces, a complicated and costly move. Signs of surging steel inventories may add to downward pressure on iron ore prices.

The holdings — which show big seasonal swings and normally peak in March — jumped 14% to 10.8 million tons last week, the highest ever, according to Beijing Custeel E-Commerce Co. Inventories more than doubled since mid-January. Last year, China’s mills made almost 1 billion tons of steel in total.

The China Iron and Steel Association recently flagged the “high level” of inventories and urged members to “do a good job of limiting output.” Separately, RBC Capital Markets said construction in China is “still at an effective halt,” and forecast a rise in both steel and iron ore holdings.

Rebar prices have been hit hard as the health crisis deepened, although there may now be tentative signs of a bottoming out. After hitting the lowest level since 2017 last week, the spot price held steady on Friday and rose 0.4% on Monday to post the first gain since mid-January. It was steady on Tuesday.