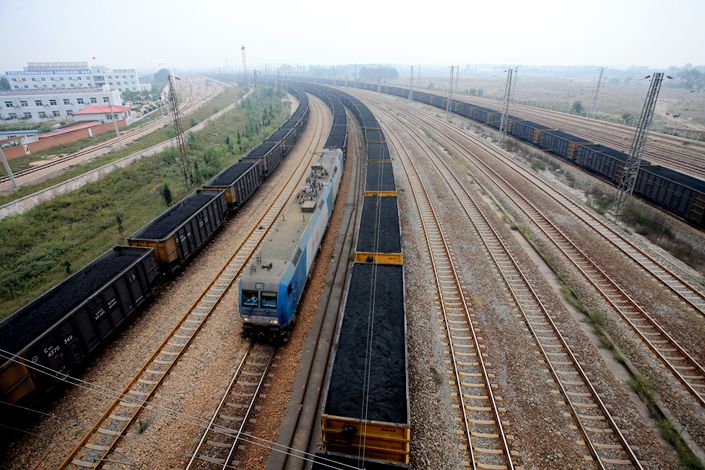 The 653-kilometer (405-mile) Daqin railway, which starts in Datong in the coal-rich province of Shanxi, and snakes through four regions until it reaches the Hebei province port city of Qinhuangdao, carried 23.71 million tons of coal last month. That was down 25.56% compared with the same period last year, according to a report filed by the rail operator to the Shanghai Stock Exchange Tuesday.

A transportation analyst told Caixin that dip is due to slumping supply and demand, not transportation capacity. The analyst said the coronavirus hasn’t had a big direct impact on the railway’s operations, as few workers are needed to transport goods.

Many of the coal mines in northern China are yet to resume work even after an extended Lunar New Year holiday, and those that have started operating again are often running under full capacity due to labor shortages, as mandatory 14-day quarantines are keeping many workers off-site.

Ordos, in North China’s Inner Mongolia autonomous region, has 333 coal mines and can produce more of the fossil fuel than any other city in China — 838 million tons a year. But as of Sunday, just 179 mines with combined annual capacity of 572 million tons are up and running, according to the local energy administration.

Energy-hungry manufacturers in China’s most developed regions have also taken a long break, contributing to low demand. Daily coal consumption by the six biggest state-owned power generators, a figure often used as a gauge of economic activity, dropped to 394,900 tons in February, posting a 24.65% year-on-year decline, data from the China Coal Transportation and Distribution Association showed.

Total freight volume on the Daqin railway fell 4.48% to 431 million tons in 2019. Zeng Hao, a coal analyst at consultancy Fenwei Energy Information Services, previously told Caixin that this figure was in part due to a higher comparison base in late 2018, as import restrictions drove purchases of domestic coal higher.