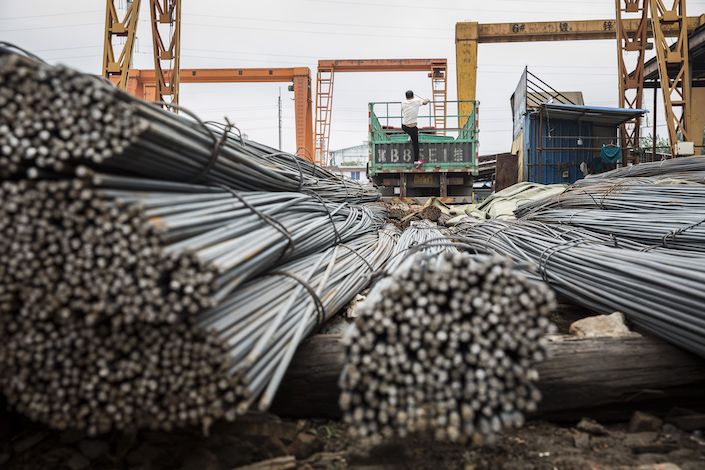 A worker stands on a truck as bundles of steel rods sit stacked at a stockyard on the outskirts of Shanghai. Photo: Bloomberg

The price of steel reinforcement bar, the somewhat unglamorous but ubiquitous commodity used to strengthen concrete, has risen almost 5% over the past month in Shanghai. Over the same period, gold — the traditional haven amid turmoil — has dropped more than 5% as investors sell to cover losses in other markets.

Rebar’s unexpected ascent as a financial sanctuary reflects Chinese investors betting that Beijing will embark on a massive bout of stimulus to help prop up the economy in the aftermath of the coronavirus, fueling demand for raw materials used in construction.

“We are calling rebar, ‘rebar gold’ these days, as it has became a haven asset during this global crisis,” said Wu Yijie, an analyst at Shanghai Dalu Futures. “We believe the Chinese government will greatly bolster infrastructure spending as they did post-SARS to boost domestic consumption.”

Chinese investors may also be drawn to steel futures because they can be traded only in China, making them more reflective of what’s happening locally and less exposed to the same forces that are ravaging other global markets like copper. China also has greater influence over pricing, Wu said. The country produces and consumes about half the world’s steel.

As the economic outlook for the U.S. and Europe worsens by the day, there’s growing optimism that the slowing rate of new infections in China points to some level of containment, fueling expectations the government will announce a raft of measures to encourage growth.

Chinese stimulus has so far included injecting more liquidity into the financial system, but expectations are growing there’ll be infrastructure investment that will aid steel demand.

Haven demand may explain why steel is managing to defy a deluge of supply that would normally be hammering prices. China produced a record amount in the first two months of this year despite its extended shutdown to get the virus outbreak under control, and rebar stockpiles sit at the highest ever.

Iron ore, the main raw material for steel, is also benefiting from some haven demand for the same reasons, according to William Chin, head of commodities at Singapore Exchange, the world’s largest clearer of iron ore derivatives.

“Iron ore’s ‘safe haven status’ is drawing strength from its proxy status as a China macro signal, benefiting from what appears at first glance to be a winning war in containing the spread of the virus, rebounding steel prices, and possible policy stimulus by Beijing to kick-start growth,” Chin said.

“This is particularly notable as traditional safe haven assets such as gold prices have come under pressure in waves of liquidity-led selling on the back of liquidity needs,” Chin said. Bullion had its worst week since 1983 last week as volatility surges across global markets after a wave of global central bank stimulus failed to quell concerns about the economic hit from the coronavirus.