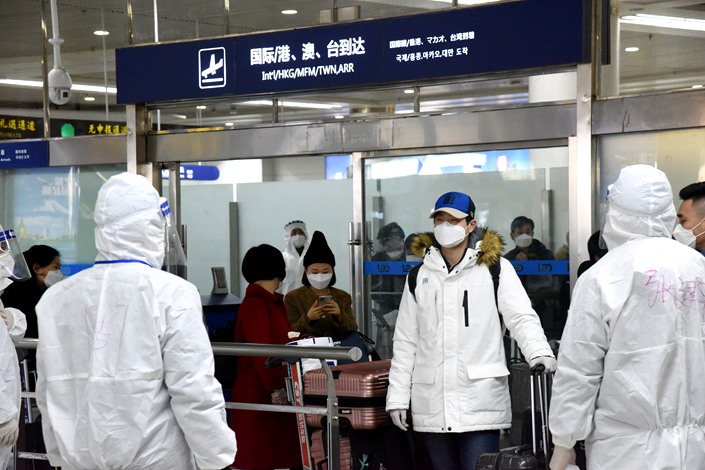 Travelers queue up at the Qingdao Liuting International Airport on March 5. Photo: Xinhua

After a grueling 48-hour journey marked by last-minute bookings and lengthy convoluted new border procedures, Jacob Gunter picked the nicer of two hotels he was shown on arriving in Beijing Tuesday.

His modern, roughly 40 square-meter room priced at 600 yuan ($86) a night had the four-star trappings—a queen-sized bed, a white cushy swivel chair, flat-screen TV, floor-to-ceiling windows, and a glitzy marble-tiled bathroom with backlit mirrors. But there’s a little extra at the C Kong International Hotel, in Beijing’s eastern Balizhuang subdistrict, where the American policy analyst must stay for 14 days.

It’s serviced by medical staff in full protective gear, and guests, funneled there after arriving at Beijing’s Capital International Airport from overseas, are pelted by both questions about their health and travel histories, as well as disinfectant spray.

Since Monday, Beijing’s municipal government has required all international arrivals to be transferred to these “concentrated quarantine centers” for two weeks of isolation, with all expenses, which could total $1,000 or more, borne by the traveler. It is the latest move to tighten China’s borders since the domestic spread of Covid-19 slowed to a trickle, replaced by a stream of imports that have become the main source of new reported infections as the pandemic worsens overseas.

Despite criticizing other countries, including the U.S., for imposing heavy travel restrictions on Chinese in an effort to limit imported cases, China has also made it harder to enter, though its borders remain open. In recent days, large swathes of overseas Chinese have attempted to return to China to flee foreign outbreaks. Wednesday marked the fourth day that new infections from abroad exceeded new domestic cases reported on the Chinese mainland.

Once thought to follow in step with China’s capital, most provinces and cities have instead implemented their own measures. On Tuesday, Shanghai expanded its list of countries with “severe” outbreaks, or those on which it places travel restrictions, from eight to the world’s 16 worst-hit nations based on reported caseloads, according to a note its foreign affairs department sent to local consulates, seen by Caixin.

China’s commercial center, as well as southeastern Guangdong province, both homes to China’s largest international flight hubs outside of the capital, require isolation only from those arriving from countries on their lists and often allow monitored homestays instead of formal quarantines.

As of Tuesday, Shaanxi province and the city of Wuhan, ground zero of China’s epidemic, were close to matching Beijing’s combination of deterrents for inbound travelers, according to the state-owned People’s Daily.

The range of measures have left many of the country’s residents, both foreign and Chinese, stranded overseas as they attempt to find a way home.

Fred Clark and his wife, both teachers, Matthew Del Bel Belluz, an actor, and Christian Jensen, a business owner, all Beijing residents, told Caixin they have been trying to return to the city. The Clarks have decided they’ll stay in Australia and won’t subject their children, ages 3 and 6, to a quarantine center. Meanwhile, Del Bel Belluz is stuck in Canada because his company won’t pay for him to stay in Beijing's mandated quarantine facilities, and Jensen is stranded in Taiwan.

Doria Liu, a Chinese national who also lives in the capital, was about to return to Beijing from a trip to Cambodia when the policy changed. Beyond the cost and uncertainty of what happens on the ground, being forced into a strange room when she has a home to return to intrudes on her personal freedoms, she said.

“It’s discriminatory. I won’t accept it,” she said via WeChat, adding that she is staying put in the Southeast Asian country for now.

But some have defended China’s measures, which come as other countries take similar aggressive actions. In one of the most recent, the European Union said this week it would temporarily shut its borders to all non-essential travelers from outside the bloc.

A flood of returnees

At a Monday press conference, China’s National Immigration Administration (NIA) announced that, since the World Health Organization declared Covid-19 a pandemic on March 11, China has had about 120,000 daily border entries. Of those, about 20,000 arrived via international flights, while 67,000 of the arrivals came from places with major outbreaks of the new coronavirus.

The same day, a group of ethnic Chinese and Chinese nationals chartered their own plane to Wenzhou, of East China’s Zhejiang province, from Milan, Italy, home to large communities of Chinese migrants. All commercial flights between the two countries had been grounded for weeks while Covid-19 cases in Italy, the worst-hit country outside of China, skyrocketed into the tens of thousands.

As of Monday, China had carried out 13 transport missions to countries with severe outbreaks, of which seven flights brought back 1,101 Chinese citizens, the NIA said.

“Right now, there are just too many people returning, and coming back to China is already a scarce resource,” said Kevin Zhang, also a Chinese national, who left his MBA studies in France due to fears over its own worsening epidemic. Since he had a slight cough, he was tested and quarantined at a government-designated hotel upon landing March 9 in Shanghai. But at more than a week into his stay, he has not been asked to pay.

“If you use up the resource or abuse it, it’s unfair to those who desperately need it,” he said.

Zhang pointed out that the policy of “concentrated quarantine” also helps ensure that anyone who lies on their health declarations or might not abide by home quarantines doesn’t come into contact with the community.

“Even if you let one dishonest person slip by, it could have a major impact on the health and economics of an entire city,” he said. “You really can’t completely trust people.”

One such high-profile case involved a woman who arrived in Beijing March 13 from Los Angeles. She allegedly concealed her symptoms of respiratory disease and is now under investigation, marking China’s first such criminal probe in the Covid-19 epidemic.

Meanwhile, China’s foreign ministry has responded to a group of parents with children studying in the U.K. who have asked authorities to intervene and provide ways for students to come home in light of the island nation’s worsening outbreaks and dwindling exit routes. In an email seen by Caixin, the ministry said that it was coordinating with Chinese embassies and relevant departments of nations to provide support, and that students should follow disease prevention directives in countries where they reside.

A mother who asked to be identified only as Jing, whose own 16-year-old daughter was set to return from the U.K. this week, said that greater transparency of policies and tougher screening prior to boarding could help flag problematic people and leave more space on flights for those that need it.

“We need to help the elderly and students,” she said. “Right now there are many people coming back that are lying on their declarations and throwing fits. Those of us in China … we are angry.”