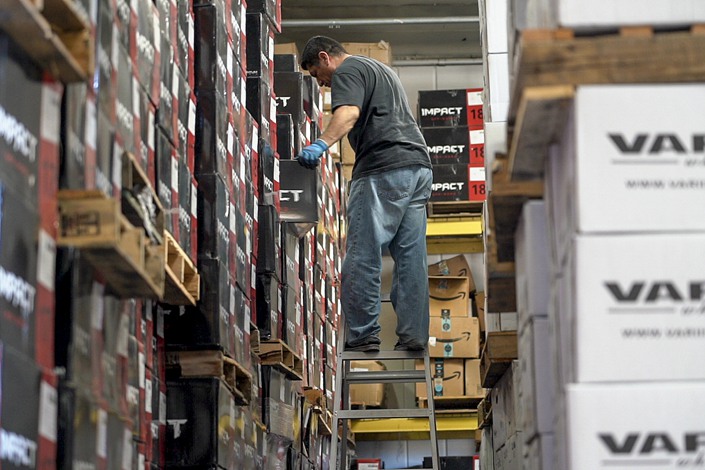 An employee moves boxes of aluminum alloy wheels inside a Chinese company’s warehouse on Feb. 10 in California, the U.S. Photo: VCG

China and the U.S. must immediately return to the negotiating table for a phase two trade deal to help ease coronavirus disruptions in global supply chains, said Harley Seyedin, president of the American Chamber of Commerce in South China.

Seyedin made the remarks in a report by the chamber released Wednesday at a press conference in Guangzhou, capital of South China’s Guangdong province.

“There are signs the world’s supply chain (is) being overstretched and the possibility of a collapse is not farfetched. In such a scenario, world recession would not be far behind,” Seyedin wrote in the report.

Around one-third of companies in South China surveyed by the chamber said they are facing shortages of some components, supplies or materials. Among those affected, about 15% said they had already run out of certain supplies, and about 80% said they could run out within one to three months.

The novel coronavirus outbreak that began in December has now been largely brought under control in China, but it is spreading rapidly outside the country. As of Thursday afternoon, the virus had infected nearly 220,000 people in around 160 countries and regions worldwide, including more than 81,000 in China, killing almost 9,000.

The survey of 237 companies, also released on Wednesday, was conducted between March 9 and Sunday as the novel coronavirus spread globally. Three-quarters of respondents were manufacturing companies, with the remainder in the retail or logistics industries. More than half of respondents were American and 20% were local Chinese companies.

Companies across the globe depend on supply chains linking China and the U.S., Seyedin wrote in the report. Replacing existing supply chains would take $2 trillion to $3 trillion, he wrote, an amount which is equivalent to about one-tenth of the U.S. GDP in 2019.

“For the sake of international trade, the U.S. and China must return to the negotiating table,” he said.

Seyedin said already slowing consumption and spending have exacerbated global economies’ vulnerability to the epidemic, and “it remains clear that business as usual has not fully resumed.” Seyedin suggested a phase two trade deal between the U.S. and China would “supply a needed boost to international economies as they restock necessary inventory.”

In January, U.S. Treasury Secretary Steven Mnuchin said at a World Economic Forum event in Davos that staged negotiation of a phase two deal could last beyond the 2020 U.S. presidential election in November, with Washington rolling back tariffs gradually as negotiations progress.

Mnuchin’s comments echoed those of U.S. President Donald Trump, who said a day earlier that “phase two is starting negotiations very shortly.” However, neither side has yet announced a deadline for the phase two talks.

Seyedin said though negotiations will progress, it remains unclear whether a phase two deal will live up to expectations and ease international trade tensions.

On Jan. 15, China and the U.S. signed a phase one trade deal that covers a range of areas in the two sides’ trade and economic relations, including intellectual property, technology transfer, agriculture, financial services and currency and foreign exchange.

Persistent uncertainty has made it difficult for enterprises and investors to plan with confidence, Seyedin said. “The world is watching for leadership from both countries. International trade does not accept that an agreement between the US and China can be pushed down the road for another year,” he said.

Lawrence Summers, former U.S. Treasury Secretary, also called on China and U.S. to cooperate in the fight against the coronavirus and work together to solve global financial and economic issues amid the outbreak.

“We need all of the cooperation of which the United States and China are capable, if we’re here to find successful outcomes for maintaining the health and also the ongoing prosperity and vitality of our societies,” Summers said Tuesday at a Caixin roundtable.

Lu Zhenhua contributed to this report.