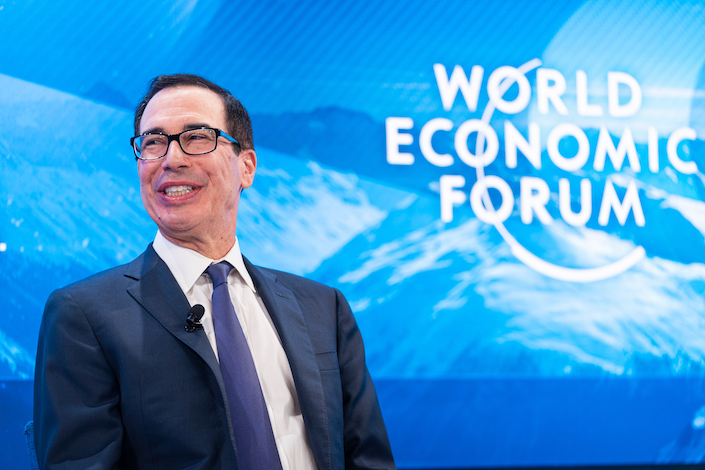 U.S. Treasury Secretary Steven Mnuchin suggested that Washington would gradually roll back its China tariffs during a staged negotiation of a phase two deal that may last beyond the 2020 U.S. presidential election in November.

Mnuchin said at a World Economic Forum event in Davos, Switzerland, Wednesday that the U.S. will start the phase two trade talks with China without mentioning a deadline.

“If we get that done before the election, great; if it takes longer, that’s fine,” Mnuchin said.

The phase two talks could be divided into several stages, he said.

“We could easily have phase two (a), two (b), and two (c),” the Treasury secretary said. “It doesn’t need to be a Big Bang. And we take tariffs off along the way.”

Imposing tariffs is a “big incentive for the Chinese to continue to negotiate to conclude various additional parts of this agreement,” he said.

Trump said he believed that the recently concluded U.S. trade deals with China and with Canada and Mexico “would not have been possible without the implementation of tariffs.”

“That is why most of our tariffs on China will remain in place during the phase two negotiations,” he said.

“The president has said if we get all of phase two done, he will remove tariffs,” the secretary said.

In Davos, Singapore’s former trade minister S. Iswaran told Caixin Global that the U.S-China phase one deal is “a good foundation for the two countries to build the next parts, which are about some of the more challenging issues.” He is currently the country’s communications and information minister.

“In any deal like this, we must look beyond the details to see the big picture,” Iswaran said. “You could argue the scope [of the deal] — sufficient or insufficient. But the fact of the matter is the two countries coming together to achieve an agreement is a starting point.”