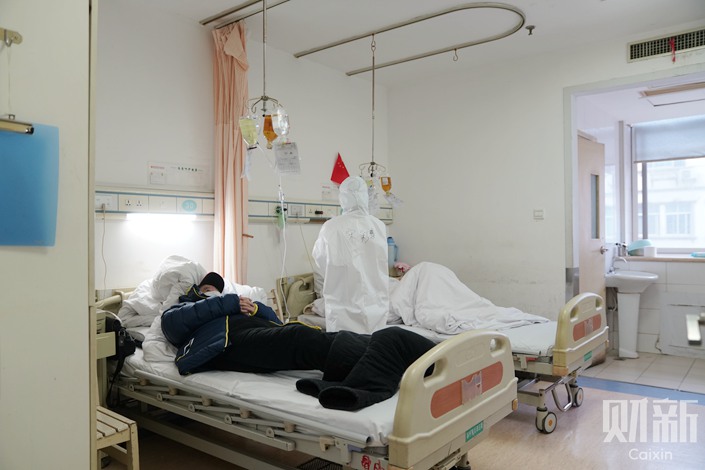 A doctor attends to a patient in Wuhan's Red Cross Hospital on Jan. 24. Photo: Ding Gang/Caixin

AbbVie Inc.’s Kaletra — an HIV drug approved by Chinese medical regulators in January to treat Covid-19 — is readily available and safe to use. Sadly, it has little effect on the disease.

Patients treated using the drug, which is a combination of lopinavir and ritonavir, died at a similar rate to those who only had standard care, peer-reviewed research published Wednesday in the New England Journal of Medicine (NEJM) found.

The research team, led by Cao Bin of Beijing’s China-Japan Friendship Hospital, recruited 199 patients in Wuhan who had a severe case of laboratory-confirmed Covid-19 for a randomized, controlled trial. Of those, 99 received Kaletra, also called Aluvia in some markets, while 100 were only given standard care.

The drug works on HIV by stopping the virus from replicating, but had no observable effect on viral shedding in Covid-19 patients, suggesting it does not fight the virus that causes the condition. Two-fifths of patients in the Kaletra group continued to test positive for the virus at the end of the trial.

Those treated with the drug were also more likely to experience side effects like nausea, vomiting and diarrhea, which were so severe in 13 patients that they had to stop treatment.

Finding an antiviral that works on Covid-19 is vital because there is currently no cure or vaccine for the disease. The Japanese flu drug faviparavir, sold by Fujifilm Toyama Chemical as Avigan, has shown promise, as has Gilead Sciences’ remdesivir.

Time is the only real weapon doctors currently have — they treat patients by providing symptomatic relief and breathing assistance where necessary, and wait for the body’s immune system to eliminate the virus, which is called SARS-CoV-2.

Test tube studies after the outbreak of severe acute respiratory syndrome (SARS) in 2003 showed the protease inhibitor lopinavir appeared to constrain the original SARS virus, which is similar SARS-CoV-2. Human trials had showed promising results, but were not well randomized or controlled, meaning other factors could have explained the patients’ recovery.

Lopinavir/ritonavir would have been an ideal treatment because it is widely available, scalable and thoroughly tested on humans, experts told Caixin previously. In contrast, remdesivir is not currently approved anywhere to treat any condition.

Such was the interest in Kaletra that people in China were apparently hoarding the drug.

Experts had long expressed doubts at the effectiveness of the drug, but generally agreed it was worth a shot. In February, Tony Cunningham, an expert in antiviral drugs and HIV treatment at a hospital in Sydney that is treating coronavirus patients, described its use as a “move of desperation.”

“The protease of HIV and the proteases of (the Covid-19 virus) are very different in structure and sequence, so it’s not surprising that this didn’t work,” Cunningham said on Thursday. Remdesivir was more promising in mouse trials against MERS, a similar coronavirus, he added.

In an editorial accompanying the study, two senior NEJM editors called the trial “a heroic effort,” and noted that even disappointing trial results provided important knowledge.

They also highlighted the fact many patients recruited for the study were late in infection and already had considerable tissue damage. They praised the researchers for organizing a rapid and sound clinical trial under such trying circumstances, given the difficulty of performing medical research in an outbreak environment.