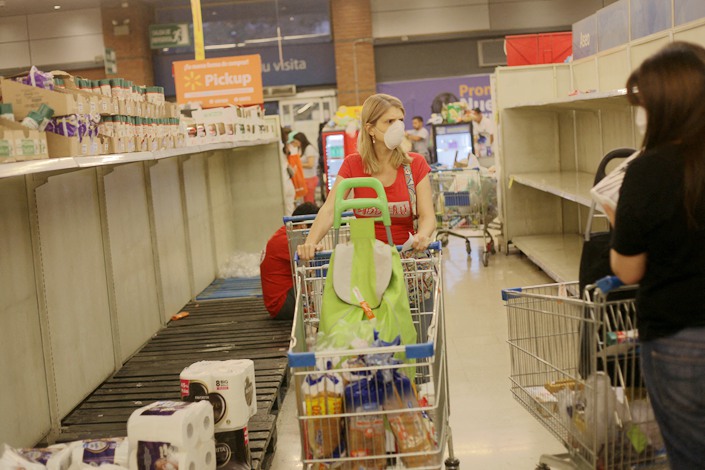 People rush to buy supplies in Santiago, Chile, on March 16.

When it comes to consumption, some people prefer to get out and about to satisfy their needs while others prefer to do things from the comfort of home. That difference — combined with strong general emphasis on social order — could be key to why many Chinese refrained from rushing to supermarkets in the early stages of the country’s Covid-19 epidemic, in contrast to the panic buying seen in other countries.

Although China witnessed some panic buying when its outbreak began in January — particularly in Hubei province when the government ordered lockdowns in the disease-hit central city of Wuhan and other areas — the runs on essential goods were comparatively short-lived as people were largely confined to their homes due to fears of getting sick that were reinforced by government restrictions in the hardest-hit areas.

With the dramatic lockdowns in Wuhan and other cities, local governments suspended transport networks and instructed millions of people to stay home in a bid to curb the spread of the virus. But to keep everyone fed, the city also mobilized teams of volunteers and couriers to ensure everyone had adequate supplies of daily necessities, from food to toilet paper and disinfectant.

Such a move wasn’t especially hard in a country that has enthusiastically embraced e-commerce and online takeout services. Even before the pandemic, online shopping for even the most basic daily needs was common, as was ordering meals for home delivery. By one estimate, China’s e-commerce sales accounted for 37% of all retail sales last year, according to an article published Tuesday by the Harvard Business Review, citing statistics from industry tracker Cifnews International.

Those trends put in place a well-greased machine, including armies of deliverymen and logistics centers, which quickly scaled up to serve many who spent much of the outbreak at home. Such systems, which also included widespread mobile payments, helped people obtain food and other supplies relatively conveniently during the period of self-quarantine.

Higher salaries and lower population densities in the West also create prohibitive costs that make it difficult to deploy the army of couriers that deliver such low-cost items as soap and simple takeout meals in Chinese cities each day.

Differences between Chinese and Western social politics and group attitudes towards governance may also explain why the East Asian nation saw comparatively little panic buying in the early stages of its outbreak, experts said.

Its government structure combined with positive portrayals of the country’s response in state-run media helps citizens feel the country has control over the crisis, said Wang Qing, founder of The Behavioural Architects, a global consultancy with a strong presence in China that specializes in understanding behavior. “That consistency (of messaging) gives people a sense of control and a conviction that (the authorities) are handling this.”

Cultural norms might also play a role, Wang added. “In China and other East Asian cultures, there is an inherent expectation for people in authority positions to take control and lead communities out of crises,” Wang added. “In such contexts, the sacrifice of individual interests is accepted for the greater good and culturally reinforced.”

The kinds of measures enacted in China in response to Covid-19 would be “so much more difficult in liberal democracies, where individualism is given much higher social value,” said Ian Hickie, a professor at the Brain and Mind Centre at the University of Sydney in Australia. “(Individualism) has advantages at other times, but it’s very difficult when you need really cohesive social action fast.”

Fast-moving emergencies like the Covid-19 outbreak can provoke similar psychological responses no matter who you are or your cultural background, Mark Mitchnick, a physician and CEO of digital therapeutics company MindSciences, told Caixin Global.

Such events can cause stress that impairs our ability to think rationally, effectively shutting down the prefrontal cortex — the area of the brain responsible for rational thought and planning — and forcing us to rely on older, more reactionary parts instead.

When that happens, “if we see 50 people buying toilet paper and the shelves almost empty, our old reactionary brain says, ‘Hey, those people must know something and I better do what they are doing,’” Mitchnick said. “When our modern brains evolved around 1 million years ago this kind of response made sense. But these old conserved survival mechanisms can backfire in today’s world.”