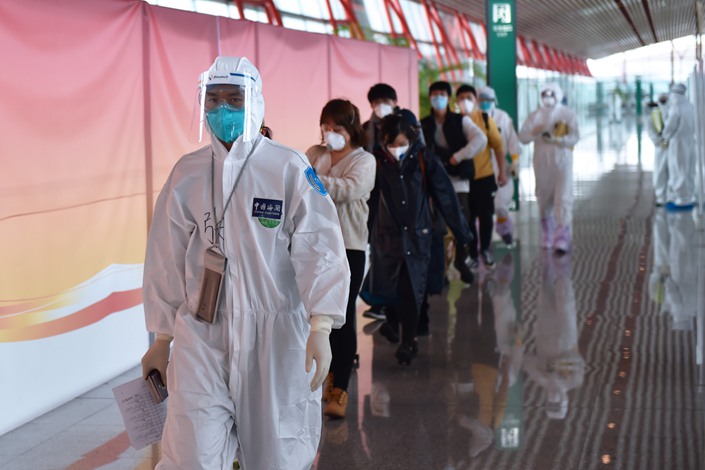 Statistics from Chinese aviation bodies showed Beijing had been set as the final destination for 231 international flights for the week of March 23-29. Photo: Xinhua

All international flights to Beijing will be diverted first to 12 designated airports on their arrival in China starting Monday, as the country looks to catch and quarantine a growing tide of imported cases from Chinese citizens and residents returning home from abroad.

The move comes after all arrivals to Beijing, one of China’s top international gateways, were initially required to undergo 14 day quarantines at designated local hotels. As those hotels filled up, the city rolled out a new policy last week requiring many inbound flights to stop first at a handful of other cities to relieve the pressure.

The move comes as many other countries are limiting or halting inbound flights in similar bids to control imported cases of Covid-19. For China, many imported cases are coming from Chinese nationals and resident foreigners, some of whom left when the outbreak first began in late January and are now trying to return. Another major group is Chinese students who were studying abroad but are now returning home after their classes were canceled and dormitories shuttered in their host countries.

Under the new system, all passengers will be required to clear customs and get screened for the virus at upon entry to China. Passengers who meet boarding conditions can then take their original flights on to Beijing, though an aviation authority official said the exact conditions were being handled by health officials, and couldn’t elaborate.

Based on experience so far at flights diverted to Tianjin, Hohhot and Taiyuan, passengers are given temperature checks, a nucleic acid throat swab test and are tested for other Covid-19 symptoms on arrival at their first port of landing, Caixin has learned. Health officials also use that screening to determine who passengers have been in close contact with before their arrival.

Through Sunday, China had confirmed 353 imported cases of coronavirus, with the largest number coming into the country through Beijing. By comparison, no new domestic cases were reported that day, as the nation brings its own outbreak under control.

Aviation analyst Luo Zhiyu told Caixin the number of Chinese citizens returning to China is increasing as the outbreak in the rest of the world worsens, putting big pressure on China. Luo pointed out that the aviation authority has been following a principle of only reducing international flights and not adding any new ones since March 16.

Statistics from Chinese aviation bodies showed Beijing had been set as the final destination for 231 international flights for the week of March 23-29. Some 148 of those are operated by Air China, while the remaining 83 are operated by China Southern, Hainan Airlines and the nine other international carriers still flying to China.

Of those 83 flights not from Air China, 30 will go to Xi’an, while Taiyuan will receive 17, Shanghai and Nanjing seven each, followed by Tianjin with six, Dalian with five, Qingdao with four, Shijiazhuang with three, and the remaining four going to Shenyang, Jinan and Zhengzhou.