By He Shujing, Sun Liangzi and Mo Yelin 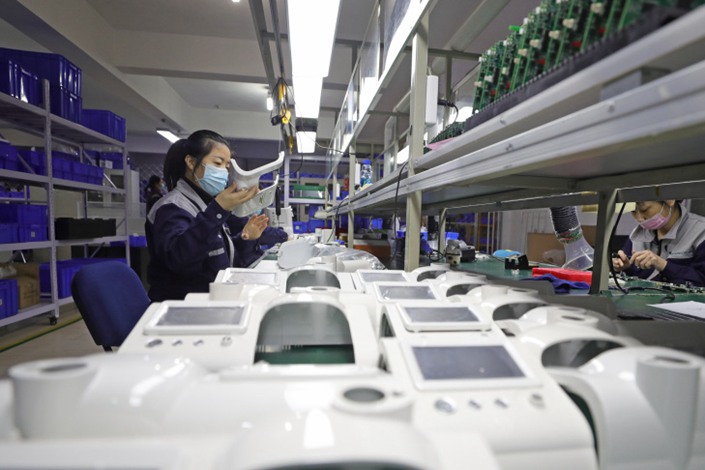 The coronavirus pandemic has sparked a global hunt for mechanical ventilators — lifesaving machines that help the sickest patients to breathe. Spurred by soaring global demand, and with the local outbreak more or less under control, Chinese ventilator-makers are now shifting their focus from domestic use to the export market.

In the 10 days from March 19, China shipped around 1,700 mechanical ventilators to markets outside the country — about half that supplied to domestic hospitals this year, Ministry of Industry and Information Technology (MIIT) official Xu Kemin told a news briefing in Beijing on Monday.

As of Monday, China had taken orders of nearly 20,000 of the machines from overseas buyers, and a “large number” of other orders were under negotiation, according to Xu.

But while those figures sound promising, Chinese ventilator-makers are facing coronavirus-related obstacles including difficulty sourcing key foreign components, and mass flight cancellations are frustrating distribution. They are also turning to government charter flights out of fear their products will be seized for use in transfer countries.

China has more than 20 mechanical ventilator manufacturers, and eight have received CE certification on their products, which allows them to be sold in the European Economic Area. Those eight firms combined make 2,200 machines each week — one-fifth of the world’s total output — according to MIIT.

Domestic manufacturers began to see a surge of overseas orders in the middle of March. Li Kai, an assistant to the chairman of Beijing’s Aeonmed Co. Ltd., one of China’s two largest ventilator-makers, said his company had received far more orders from overseas since the middle of the month than from domestic buyers.

Shenzhen’s Mindray Bio-Medical Electronics Co. Ltd. has taken so many orders that it faces a backlog into the third quarter. Meanwhile two smaller players — Jiangsu Yuyue Medical Equipment & Supply Co. Ltd. and Micomme Medical Technology Development Co. Ltd. — said they had accumulated a backlog of orders until at least the middle of April.

“Most of the overseas orders we’ve taken are from countries in Europe and the U.S.,” said Zhu Yanbo, a regional manager at Yuyue Medical. “Every day we receive non-stop phone calls, asking to order hundreds and sometimes even tens of thousands ventilators,” Zhu said.

“We are now seeing a similar surge in demand we experienced earlier when the virus first broke out in China,” Zhu said.

Chinese ventilator-makers have made use of the extra production capacity built up in recent months to meet export demand. Invasive ventilation is the main weapon in the arsenal of intensive care doctors as they treat acute sufferers of respiratory diseases such as Covid-19. So pronounced is the current shortage in some countries that doctors have been told they can repurpose other machines, such as those used in anesthesia.

But compared with some of the big names in the industry such as Switzerland’s Hamilton Medical, Italy’s Siare Engineering and U.S.’s GE Healthcare, Chinese ventilators are little known. And they are facing obstacles similar to their international counterparts.

One is a lack of raw materials, said Aeonmed’s Li. “A ventilator is made up of components that tend to be very highly specified with long development cycle. Available manufacturers of many of these components are usually few and far between,” Li said. Many of the components are sourced from other countries, and Covid-19 has disrupted their supply chains.

Yuyue Medical’s Zhu said the company also relies on foreign suppliers for key components. Due to the coronavirus disruptions, they have been dealing with soaring prices of both raw materials and logistics.

Getting the products into the hands of overseas buyers is a major issue.

After the coronavirus outbreak began in China early this year, many countries cut their travel links with China as part of efforts to contain the virus’ spread. Now China too has shut its borders to foreign passport holders and drastically cut international flights to and from the country.

Commercial flights carry about half of the world’s air freight cargo.

With the limits on commercial flights, a major way of transporting ventilators out of China is now through government-chartered flights, Caixin learned from several distributors. That’s because of fears that with ventilators short of supply everywhere, governments in transfer countries could seize them for their own use.

One distributor said he recently inked a deal involving 2,000 ventilators worth 100 million yuan ($14 million). The ventilators were shipped by a government-chartered flight arranged by the destination country, according to the trader.