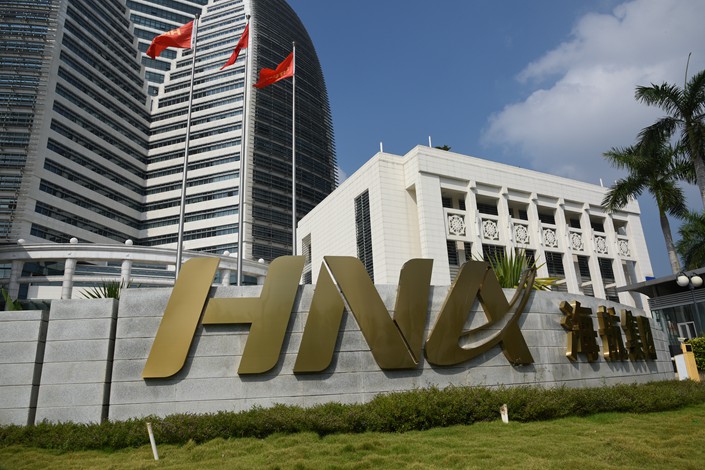 Debt-laden Chinese conglomerate HNA Group Co. Ltd. caused uproar among holders of a bond maturing on Wednesday after calling a last-minute meeting to approve a plan that will delay repayment for one year and head off a default.

The hastily arranged teleconference on Tuesday evening was aimed at securing agreement from investors for the extension which HNA had been negotiating with some creditors, but descended into acrimony as participants hurled insults at the company, calling it a “liar” and demanding it apply for bankruptcy, people familiar with the matter told Caixin. HNA subsequently apologized to bondholders in a posting on its WeChat social media account.

HNA, whose activities include aviation, real estate and financial services, is struggling to dispose of assets and pay off a mountain of debt built up during a multi-billion-yuan global spending spree that saw its borrowings surge to as much as 700 billion yuan ($99 billion). The government of Hainan province in southern China, where HNA is headquartered, set up a working group in February to organize a rescue of the company whose financial situation has further deteriorated as a result of the coronavirus pandemic and is facing a severe cash crunch.

Sources with knowledge of the matter told Caixin that the organization of the meeting, scheduled to begin at 8 p.m. on Tuesday evening, was chaotic. A person working for a private equity firm in Guangdong province who declined to be identified, told Caixin he got a call from HNA after the market closed asking for his email address so that notification and details of the meeting could be sent out.

HNA sent an email to bondholders at around 6:30 p.m. asking them to register for the meeting by 7 p.m. with relevant documents proving they were investors and if they failed to do so they would not be allowed to attend the meeting to vote on the repayment extension, some bondholders told Caixin. “For large institutions, it is impossible to prepare these documents and have them stamped with the company seal within half an hour after working hours,” one participant complained at the meeting, Caixin has learned. Some investors told Caixin they didn’t receive any notification.

The first proposal was to agree to waive HNA’s obligations to comply with market regulations for convening bondholder meetings. These stipulate that a bond issuer should give at least 10 trading days’ notice of a meeting. The second was to extend the deadline for repayment of the 13 HNA Bonds until April 15, 2021, and that during the period, the bonds would pay the same interest rate as the prevailing benchmark lending rate, which, since August 2019 has been the national loan prime rate.

Some bondholders at the meeting questioned the legitimacy of the vote, complaining that HNA did not publicly disclose its proposals to the Shanghai Stock Exchange or via regulators’ website, sources with knowledge of the matter told Caixin. Essence Securities Co. Ltd., the lead underwriter of 13 HNA Bonds told the teleconference that it had uploaded documents of the proposals to the bourse but the documents had not been published in time “due to the early closure of the disclosure channel on the exchange’s website.” But Essence Securities’ response was criticized by some participants who called on investors to vote against the proposals, the sources said.

HNA published an apology (link in Chinese) for the chaotic last-minute meeting on its WeChat social media account late on Tuesday. It acknowledged the shortcomings in the preparation work for the meeting but said the company faced severe cash flow pressure as a result of the coronavirus outbreak. "We are deeply sorry to all investors," HNA said.