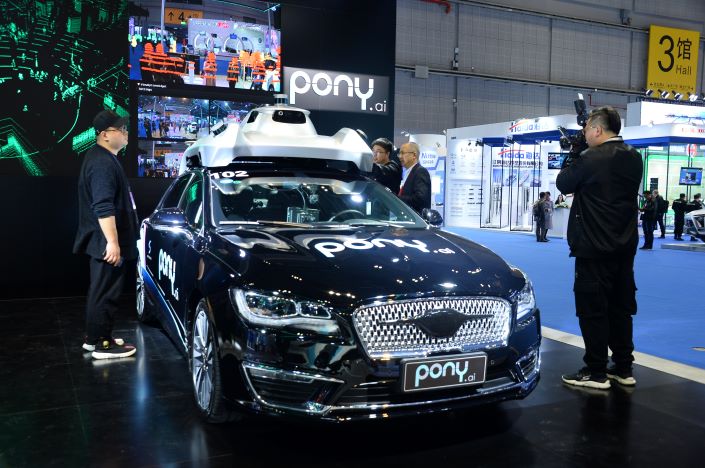 (Bloomberg) — With autonomous-vehicle companies parked by Covid-19, Pony.ai has teamed up with Los Angeles-based e-commerce site Yamibuy to deliver packages and groceries in the city of Irvine. Yamibuy specializes in Asian foods and home goods. The partnership is meant to help meet the surge in delivery demand, as consumers across the U.S. and around the world have been forced to stay at home.

Pony.ai, a Fremont, California-based startup, will deploy its fleet of 10 modified Hyundai Kona battery-electric cars with a safety driver in every one. The contactless and autonomous deliveries will go directly to customers’ doorsteps, with Yamibuy automatically assigning orders from its platform to Pony.ai vehicles in Irvine. Packages then will be collected from a local distribution center, driven to a customer’s address and left on the doorstep by the safety driver — or a customer can choose to collect a package from the trunk of the car.

The delivery service, which launched today, is expected to run until midsummer. Under rules from the California Department of Motor Vehicles, autonomous-driving companies are allowed to test delivery vehicles on public roads, so long as they hold the correct permit and the vehicles weigh less than 10,001 pounds.

“We quickly converted our existing robotaxi fleet to repurpose them for goods delivery,” said Pony.ai Chief Executive Officer James Peng. “I am thrilled that we are able to help the local community by delivering much-needed food and packages to the doorsteps of residents.”

Autonomous-vehicle startups across the Bay Area and the rest of California have suspended testing of their self-driving technology on public California roads in the face of the coronavirus pandemic. That list includes General Motors-backed Cruise, Alphabet-owned Waymo and San-Francisco based Zoox.

While Pony.ai has largely focused on autonomous ride-hailing, the partnership with Yamibuy addresses part of what’s seen as a growing need, in a post-pandemic world, for safe, contactless ways of getting goods to consumers. In early April, SoftBank-backed Nuro was granted a California DMV permit to test low-speed delivery vehicles without a safety driver. The permit allows Nuro to make deliveries for local businesses. Waymo also has a driverless testing permit.

Pony.ai hopes, in time, to generate revenue from the partnership with Yamibuy. The company is in talks with the DMV over whether it will be allowed to be compensated for delivery under state rules, which prohibit delivery fees without a commercial use permit.

“Under a permit for testing with a driver, AV companies cannot receive compensation for transporting goods,” the California DMV said in an emailed statement. The issue of fares for autonomous ride-hailing in California has been a source of contention between the industry and regulators, as the industry is eager to prove the commercial viability of AVs.

Prior to the pandemic, Pony.ai was running an autonomous ride-hailing pilot in Irvine, sanctioned by the California Public Utilities Commission, as well as providing rides to city employees in Fremont, traveling between city government buildings. The startup deepened its relationship with Toyota Motor Corp. in February when the Japanese automaker invested $400 million in Pony.ai, taking its valuation to more than $3 billion.

Pony.ai’s operations in China slowed down because of Covid-19 earlier this year, but it resumed robotaxi pilots in Nansha, Guangzhou province, and in Beijing by Feb. 17, as government restrictions eased. The company has since implemented new sanitation protocols for its China vehicles, requiring cleaning after each ride. Pony.ai said it hopes to restart the California pilots once it’s safe and it has permission to do so.

“It is this focus on versatility of our technology that enabled us to contribute to society during this unprecedented time,” CEO Peng said.