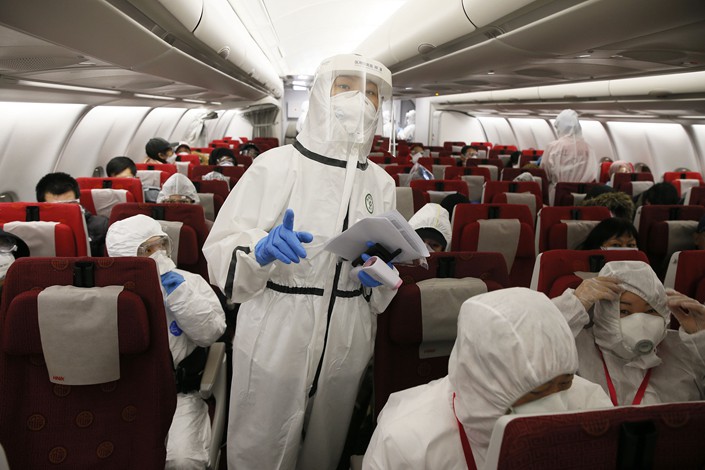 More than two dozen people on a flight from Russia have tested positive for the coronavirus upon arriving in China, according to Chinese health authorities.

A total of 28 people on Air China flight CA910 from Moscow to the northwestern Chinese city of Xi’an returned positive tests after landing Monday morning, according to a statement (link in Chinese) published Tuesday on the website of the Health Commission of Shaanxi province, of which Xi’an is the capital.

The infected people include 27 passengers and one member of the flight crew, and are aged between 24 and 64. While many have shown Covid-19 symptoms like fever, coughing and headaches, seven people are asymptomatic, the statement said.

All 166 people on board the flight have been quarantined for medical observation, it added.

The new cases come after China’s ambassador to Moscow, Zhang Hanhui, condemned Chinese citizens who have returned home from Russia amid the Covid-19 outbreak. Zhang said Friday in an interview with China’s state broadcaster that their actions risked spreading the deadly virus even further.

His comments backfired on Chinese social media, where some users argued (link in Chinese) the government had a duty of care to stranded overseas citizens, while others pointed out (link in Chinee) that Chinese nationals had a legal right to return home if they wanted to do so.

Zhang had said in an April 7 interview that there were 160,000 Chinese nationals in Russia.

A Russia-based Chinese national with knowledge of the flight, who requested anonymity because he was sharing certain passengers’ personal details, told Caixin that many travelers on the flight were Chinese goods traders working in Moscow’s Lyublino and Sadovod markets.

Many decided to fly back to China due to limited foreign language ability and doubts about the Russian health system’s ability to cope with the Covid-19 pandemic, he added.

Although China has largely brought its outbreak under control, disease hotspots have recently emerged in areas near the Russian border.

Authorities in the remote northeastern Chinese city of Suifenhe, where the two countries have a border crossing, implemented a strict lockdown earlier this month after nearly 300 people, mostly Chinese nationals returning from Russia, were found to have contracted the virus.

The rise in so-called “imported” infections in China’s Northeast also spurred the temporary closure of its land border crossings with Russia earlier this month.

The world’s largest country has so far recorded about 58,000 cases of the virus and more than 500 deaths, according to a tally by Johns Hopkins University.