Robo-Taxis Have a Long Road Ahead of Them in China 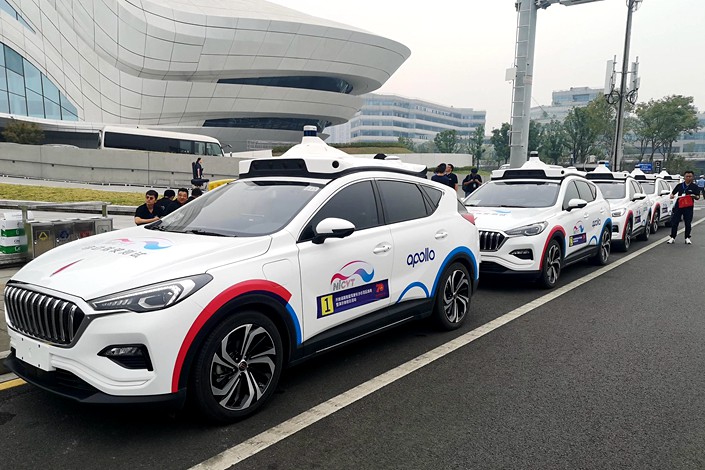 Baidu tests its robo-taxis in Changsha, Hunan province, on Sept. 26.

Robo-taxis remain a long way from becoming an everyday sight in China, despite the launch of several recent high profile trials around the country.

Cost concerns, restrictive local policies and questions about safety remain obstacles to rolling out autonomous vehicles on a large scale anywhere in China, according industry reports and interviews with veterans in the business.

That’s important to keep in mind as Chinese companies continue to hype the technology with launches of new trials in cities around the country.

On Monday, Baidu Inc. announced the trial launch of its Apollo robo-taxi service in Changsha, Central China’s Hunan province. Customers will be able to hail these taxis for free through Baidu’s maps app (link in Chinese) though a human driver will be along in case of emergency. The internet search giant is just one of a long list of companies, including as AutoX Technologies Inc. and Didi Chuxing, with aspirations to launch autonomous taxi services in China.

Pony.ai, an autonomous driving startup based in Guangzhou, South China’s Guangdong province, put self-driving taxis on the road at least twice in late 2018 and late 2019, once in Guangzhou and once in California. WeRide.ai also trailed such a service for free in December, while ride-haling giant Didi disclosed its plans of test robo-taxis in Shanghai in November.

But there are challenges. Safety is one. Autonomous driving technology still isn’t good enough to pilot a vehicle safely through real-world driving conditions because of technical issues such as difficulties in recognizing traffic signs, pausing under complex road conditions, and blind spots in identifying bicycles, according to a report on the industry by the nonprofit group China EV100.

It was technical issues that stopped U.S. automaker General Motors from releasing its planned robo-taxi model in 2019.

According to China’s latest standards for automated driving, a robo-taxi service is categorized as Level 4, one notch below Level 5, which is completely autonomous driving. China’s goal is to achieve scale production of Level 3 autonomous driving by 2025, the National Development and Reform Commission said in February.

Safety is also the major concern of local governments charged with supervising robo-taxi trials on their roads. Across China, local governments have banned autonomous vehicle tests unless there are human drivers inside the vehicles.

This poses a financial problem for the companies running these services. Having a human driver inside the vehicle defeats the whole purpose of a robo-taxi service. It also removes the major source of cost savings that the companies behind these services were banking on. Taxi services have been seen as an excellent place to pioneer autonomous driving because of this presumed cost savings, but only if they can operate without human drivers.

Moreover, the ongoing Covid-19 pandemic has left the auto industry as a whole in dire straits, with many carmakers now struggling to survive. The latest estimate by IHS Markit predicts that global light vehicle sales will slump by 22% in 2020.