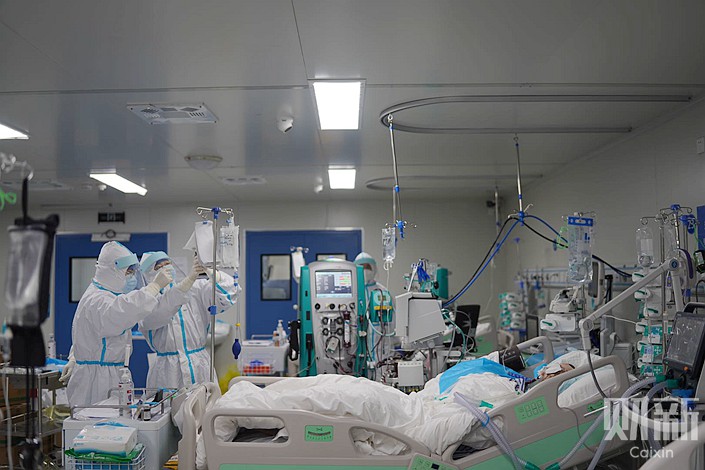 On April 7, just one severely ill patient was still hooked up to an extracorporeal membrane oxygenation (ECMO) machine in the ICU of Wuhan’s Leishenshan Hospital.

His face had a purplish hue and his mouth formed an “O” shape. Tubes of various sizes sprouted from both his head and body — his kidney function was being supported by dialysis and the ECMO machine was putting oxygen into his blood and pumping it around his body. Due to heart problems, his chest heaved violently.

In the early evening, the monitor in front of the patient’s bed flashed red and sounded an alarm. Doctors and nurses surrounded his bed in an attempt to keep him alive, adjusting his blood’s oxygen level and pressure. After 30 minutes of effort, the siren finally subsided.

The 68-year-old patient was not only one of the last remaining in Leishenshan, one of two emergency field hospitals built in Wuhan to treat Covid-19 patients, his stay was also one of the longest. The man developed symptoms on Feb. 1, his condition worsened nine days later and he was hospitalized with breathing difficulties, according to Peng Zhiyong, head of the intensive care units at Zhongnan Hospital of Wuhan University and Leishenshan Hospital.

Both ventilation and intubation were applied to the patient, but his condition showed little improvement. On March 3, he was hooked up to the ECMO machine, and was still plugged in as of April 7. As a result of long-term intubation, he had twice developed infections along witih liver, heart and kidney complications. Yet the doctors wanted to keep trying.

“The patient is tenacious and wants to live, so we aren’t giving up and want to bring him back,” one doctor said.

The bed across from the man was occupied by a middle-aged woman, whose face had regained its color. She was able to move about the bed and was preparing to be discharged from the hospital the next day.

“I think I was in the same shape as him,” she said, gesturing to her neighbor. The woman had developed symptoms in late January, and was in hospital for more than two months. At one point doctors also resorted to treating her with ECMO. She survived.

“I’m grateful to them from bringing me back from the brink of death,” she said, giving them a thumbs up.

According to Peng, on April 7, the two ICUs at Leishenshan still had 17 severely ill patients, who had all developed symptoms about two months earlier. In comparison, the average number of days a person takes to clear their body of the virus is 20. Among the 17 patients, about seven had acute illnesses, which doctors had deemed the biggest challenge.

According to Peng, the severely ill fell into two categories. Those in the first category had suffered severe lung damage and function would not return in the short term, meaning they require ECMO support to live – at that time, Leishenshan only had one patient in this category. Patients in the second category had already recovered from the virus, but were experiencing complications such as multiple organ failure, or had underlying conditions prior to contracting the coronavirus. Covid-19 therefore induced other severe conditions such as coronary heart disease, stroke, and tumors, Peng said.

Public statements from Hubei province’s health authorities showed that on April 14, 179 Covid-19 patients remained in Wuhan’s hospitals, 57 with acute illnesses and 33 who were critically ill. On Friday, the National Health Commission (NHC) announced that the situation had improved further: the number of patients with acute illnesses in Wuhan had fallen to zero, something perhaps unimaginable during the peak of China’s epidemic’s in mid-February, when nearly ten thousand were hospitalized.

To concentrate medical resources in recent weeks, Hubei’s coronavirus epidemic response task force decided on April 12 to consolidate patients into facilities including Wuhan’s Tongji and Jinyintan hospitals, depending on their condition.

On April 14, the last four severely ill patients at Leishenshan were transferred to Zhongnan Hospital. With it, the makeshift facility was retired, and Peng no longer had to go back and forth between the two locations.

Zhongnan Hospital’s ICU now had a total of 13 patients from both Leishenshan and Jinyintan. According to officials, since it opened on Feb. 8, Leishenshan had taken in 2,011 patients, ranging from infants to people over 100 years old. A total of more than 1,900 recovered and were discharged, or roughly 94% of patients.

The heads of ICUs that spoke to Caixin emphasized the importance of clinics that conduct screening and serve as gatekeepers. These, they say, are the real front line of the battle against Covid-19. As hospitals return to normal, they say, hospitals must make full use of their fever clinics and give full play to epidemiological investigations.

According to Peng, several lessons could be drawn from the last three months in intensive care. First is the need to provide ventilation to patients as early as possible. Second is to intubate them as soon as it becomes clear that ventilation has no effect. Third is to promptly assess the damage to a patients’ lungs to see if the use of an ECMO machine is needed, as here, too, time is of the essence.

With Hubei’s coronavirus numbers steadily declining since the second half of March, the swathes of medical personnel that had arrived from around the country to assist the province have also departed.

Some 42,600 doctors and nurses had been dispatched to the province, including 19,000 acute illness specialists. On April 15, the last medical team originating from Beijing left Wuhan.

Yet despite finishing her stint at Jinyintan Hospital, Jiang Li had to stay.

According to arrangements made by the central government, 20 experts including Jiang, head of acute medicine at the Xuanwu Hospital of Capital Medical University in Beijing, remained in Wuhan to treat the last remaining coronavirus patients. Among the 20, eight are members of a team of experts formed by the NHC, while the remaining doctors hailed from hospitals in Beijing and Jiangsu province. Several were part of the central government’s commanding group.

According to one member, the experts that have stayed behind not only have to supervise treatment of the remaining patients, they must also work on asymptomatic infected individuals and those that “retest positive,” referring to those who may have previously tested negative but had not completely cleared the virus from their bodies.

On April 13, as patients were being consolidated in Wuhan, Jiang stood on the sixth floor of Jinyintan Hospital, looking at the central monitoring station’s screens, which were once lit up with red alerts. Now there were only three quiet lines.

Jiang, who worked through the SARS epidemic almost two decades ago, had a mix of emotions. Just a day prior, the 14 Covid-19 patients at Jinyintan, a facility once thought to be in the eye of the storm, had all tested negative and were mostly transferred to other locations.

Now, she looked out the window of the hospital, which had combatted Covid-19 for 80 straight days. Outside, winter had given way to spring, and the leaves were a vivid green.