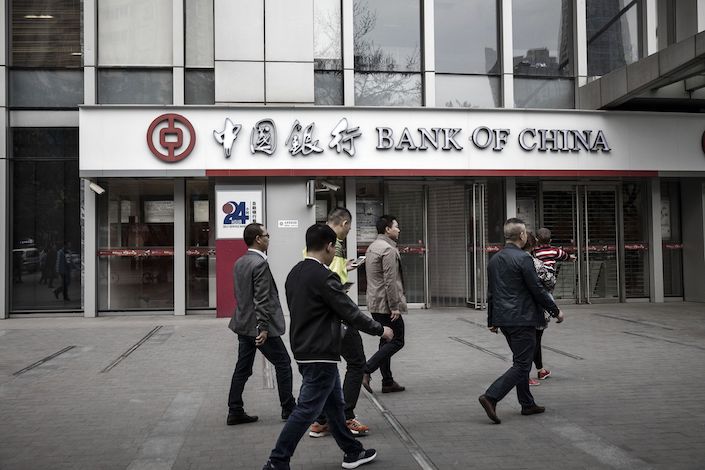 Pedestrians walk past a Bank of China branch in Chengdu. Photo: Bloomberg

The Financial Stability and Development Committee (FSDC), a cabinet-level body under the State Council established in 2017 to oversee various agencies supervising the financial sector, for the first time emphasized financial risks associated with international commodity markets at a Monday meeting chaired by Vice Premier Liu He.

The session’s focus shows how seriously the highest levels of China’s government are taking the recent events, which cost investors at least $6.4 billion in losses.

A person close to the committee said the agency’s remarks were in response to the recent collapse of a speculative financial product linked to crude oil futures sold by Bank of China (BOC). The incident cost investors at least $1.4 billion.

In addition, the Chinese coffee chain Luckin Coffee Inc. last month disclosed that nearly half the revenue it reported in the last three quarters of 2019, or 2.2 billion yuan ($310 million), was fake. That wiped out $5 billion of Luckin shareholder value.

The BOC investment vehicle, known as Yuan You Bao, exposed nearly 60,000 investors to massive losses after oil prices plunged well below zero April 21. Caixin learned that most of the investors, who bet on oil price to rise, lost all of their initial investments of 4.2 billion yuan and in addition wound owing 5.8 billion yuan to the bank for total losses of 10 billion yuan.

The incident triggered an uproar and put similar commercial bank products under a spotlight. Caixin learned that major banks including the Industrial and Commercial Bank of China (ICBC), China Construction Bank (CCB), Bank of Communications (BoComm), and Minsheng Bank all registered with the banking regulator to offer similar speculative investments over the past few years.

Top officials in the FSDC meeting ordered institutions to limit the fallout of the incident, tighten reviews of investors to ensure their risk tolerance matches the risks of investments and clarify legal responsibilities in such transactions.

The Yuan You Bao collapse has drawn closer scrutiny of BOC’s operations in such investments. Critics said the bank failed to comply with investor suitability requirements as the product proved to be riskier than described. Meanwhile, some experts said the bank should shoulder some losses because of its role as the link between retail clients and overseas futures brokers.

“The incident reflected inadequate disclosure of risk and responsibility (in the investment), as well as operational flaws,” a bank executive said. “The best way to deal with the crisis is (for the bank) to shoulder risks as much as possible.”

The China Banking and Insurance Regulatory Commission (CBIRC) last week demanded that BOC investigate losses generated by Yuan You Bao and urged the bank to resolve disputes with investors through negotiations that protect investors’ interests.

All other banks that offer similar products suspended the investments.

The FSDC also pledged to crack down on market irregularities such as financial fraud, insider trading and market manipulation. There will be zero tolerance for capital market fraud, and violators will be punished harshly, officials said.

The Luckin scandal triggered a nosedive in the company’s Nasdaq-listed shares and dealt a further blow to the reputation of Chinese enterprises listed abroad.