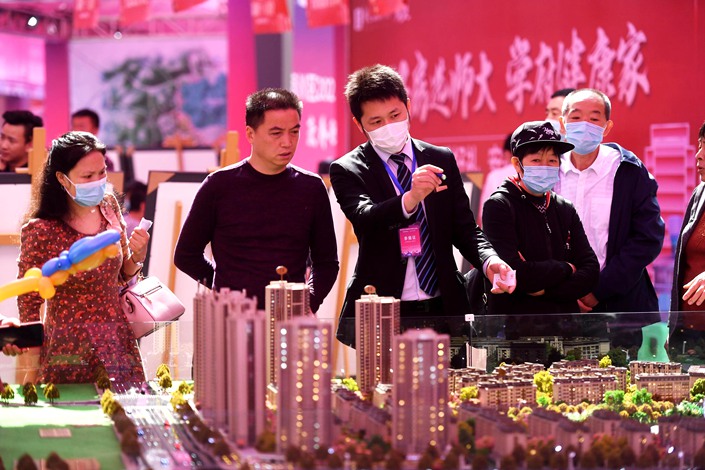 People shop for property at a housing fair in Chongqing on May 1.

China’s property market, which was battered by the coronavirus epidemic in the first quarter, is showing signs of recovery, with government data pointing to a pickup in demand and rising prices in many areas across the country.

The improvement may give some comfort to China’s leaders and policymakers who will be gathering in Beijing later this week for the annual meeting of the National People’s Congress, the country’s legislature, which was delayed from its traditional March fixture because of the Covid-19 outbreak. The government is expected to announce its main targets for the year, including economic growth and the budget deficit, along with details of policies including reform of the household registration system which could give further support to the property market.

A monthly survey (link in Chinese) of 70 large and medium-sized cities showed that in April, prices of new homes increased on a month-on-month basis in 50 towns, the highest number since September 2019, while the cost of second-hand housing rose in 37 cities, up from 32 in March. The report, released by the National Bureau of Statistics (NBS) on Monday, showed the average price of a newly built dwelling in 31 second-tier cities rose 0.5% month-on-month, up from a 0.3% increase in March, while in 35 third-tier cities, new-home prices gained 0.6%, up from an 0.2% increase in March.

“As the situation of Covid-19 epidemic prevention and control in China has improved, economic and social order has been further restored, and pent-up demand for housing which was suppressed by the epidemic has been further released,” NBS statistician Kong Peng said in a statement (link in Chinese). Large swaths of the economy shut down from late January to early March amid government efforts to prevent the spread of the coronavirus, and property sales and land auctions were halted.

Monday’s report adds to evidence that the property sector, a key pillar of China’s economy, is recovering as the economy has reopened and business activities are gradually returning to their normal level. The survey of 70 cities doesn’t give details of transactions but data (link in Chinese) from the NBS on Friday showed that sales of newly built housing, new housing starts and land purchases by developers are slowly picking up.

The decline in the total floor area of residential housing sold across the country in the first four months of 2020 narrowed to 18.7% from a 25.9% decline in the first quarter, Friday’s data report showed. The NBS only provides cumulative data but the slower pace of decline suggests that in April residential sales fell just 1.5% year-on-year, compared with a 13.9% decline in March, according to Caixin calculations based on NBS data.

The decline in investment in residential housing development also moderated to 2.8% year-on-year in the first four months from a 7.2% drop in the January-to-March period, while the amount of money developers spent buying land-use rights from local governments jumped by 6.9% after an 18.1% drop in the first quarter.

China’s gross domestic product (GDP) shrank 6.8% year-on-year in the first three months of 2020, the first quarterly contraction since the data series began in 1992. The government had up until then resisted calls to relax its long-standing controls on the housing market aimed at preventing a surge in prices that could lead to a property bubble. Many analysts expected the government would relent after the dismal first-quarter data, but it has shown no signs of changing its position.

Cities that have tried to roll back controls in order to stimulate their local economies have been forced to backtrack. In the latest example, Jingzhou, a city in Hubei province, the epicenter of the Covid-19 outbreak, withdrew (link in Chinese) a package of support measures for the property market in April just days after releasing them, saying they did not conform with the provincial authorities’ policies.

“Local governments continued to resolutely implement the decisions and arrangements of the Central Committee of the Communist Party of China and the State Council, whose positions are that houses are for living in not for speculation,” Kong said in Monday’s statement.

Although restrictive policies have only been marginally relaxed since the coronavirus outbreak, the central government has indirectly provided support for property activities through monetary and credit easing, Wang Tao, head of China economic research at investment bank UBS AG, wrote in a Caixin column (link in Chinese) on Wednesday.

The average mortgage interest rate for a first-time buyer was 5.32% in the period April 20 to May 18, 11 basis points lower than the month-earlier period and marked the fifth consecutive month-on-month decline, according to online financial services platform Rong360.com which surveyed 674 branches of 66 banks in 41 cities. The decline was mainly due to the decline in the five-year-plus national loan prime rate during the period, the survey, published on Monday, found.

Property has traditionally played a key role in China’s economy. Lu Ting, chief China economist at Nomura International (Hong Kong) Ltd., has estimated (link in Chinese) that based on NBS data showing the real-estate industry contributed 7% of GDP in 2019, that figure could rise to 25% when related industries such as building materials and household appliances are taken into account. As such, the recovery of the housing market will be a key factor affecting economic growth. Although there has been an early post-Covid-19 rebound, the outlook for the rest of the year may not be as positive.

A UBS survey of 3,322 people in April found “a significant weakening of market sentiment and home purchase intention,” according to a May 11 report. “Respondents’ purchase intention in the next 2 years declined sharply from 35% one year ago to 21%, while a record number of respondents said they had no intention to buy a property.” The survey also showed the coronavirus outbreak had not only hit property transactions but also household income and confidence in the property market.

The latest quarterly survey (link in Chinese) of 20,000 urban depositors by the People’s Bank of China backs up that sentiment. The number expecting prices to increase in the coming quarter fell to 23% from 26.5% in the previous survey while the proportion who said they planned to buy a home slid to 19.2% from 20.7%. The economic impact of the Covid-19 outbreak has hit the incomes of millions of Chinese and uncertainty over the employment outlook is affecting spending decisions, as the central bank survey shows.

Wang from UBS now expects a decline in full year property sales in China of 5% to 7%, a bigger drop than her previous forecast for a fall of 2% to 4%, and foresees a decline in new housing starts of 4% to 6% compared with a previous projection for a decline of 3% to 5%. She also expects sluggish growth in property investment of 2% to 4%.