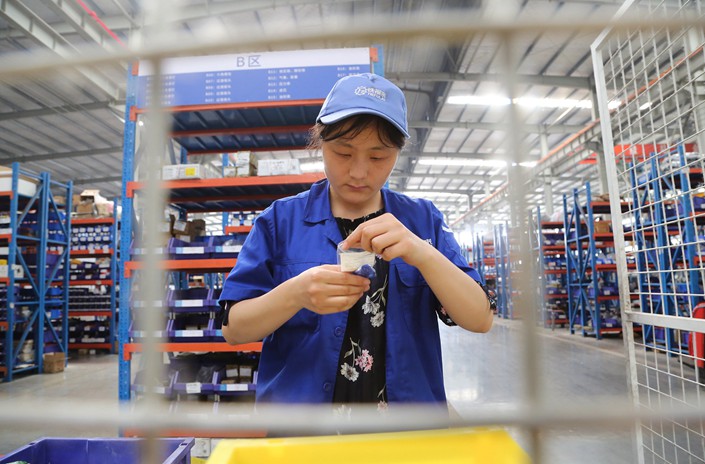 Workers inspect the quality of products Thursday at an equipment manufacturing workshop in Pingdingshan, Henan province.

How much of China is back?

Official data suggest that almost all above-scale industrial companies resumed operation by the end of April. Construction activity also seems to have rebounded quickly in April, as reflected in fast demand recovery for excavators and consistent with positive year-on-year growth in both property (7%) and infrastructure investment (4.8%) in April.

In particular, while more than 80% of restaurants and shopping malls reopened by the end March, in-store traffic and sales are still below normal. Movie theaters were just allowed to resume limited operation on May 8. Meanwhile, the recovery of domestic business/leisure travel started gradually in April, and the recovery of overall air passenger traffic was slow. April saw a 69% year-on-year contraction. Hotel revenues were back to 70% of the 2019 level from May 1 to May 5, but mainly thanks to the Labor Day holiday.

How bad is unemployment?

Official unemployment data has likely underestimated Covid-19’s full impact on the labor market. The official surveyed urban unemployment rate rose from 5.2% in December to 6.2% in February and edged down to 6% in April.

We think the data likely underestimates the overall unemployment because the survey does not include some migrant workers and self-employed people, while mobility restrictions during February and March may have also distorted the survey results.

We estimate that 70 million to 80 million people in industry, construction, and the hardest hit services sectors (retail and wholesale, catering and lodging, transportation and household services) were not working or had lost jobs by the end of March, based on work resumption rates in these sectors. This estimate is broadly consistent with National Bureau of Statistics (NBS) data revealing that overall employment in March declined 6% from January level (a drop of 27 million) and 18.3% of the employed urban people (76 million) had not yet resumed work by the end of the month.

The labor market is improving as activity resumes, but pressure remains. As work resumptions have continued to improve, we estimate that the number of people not working in early-May in the key sectors have dropped to 33 million to 40 million, down from 70 million to 80 million at the end of March.

The NBS also said that outbound migrant worker numbers have reached 90% of last year’s level at the end of April, implying that about 18 million were still at home. Further, the NBS said that the share of employed urban people not working went down from 18.3% at end March to 3.5% (14 million to 15 million, down from 76 million).

However, China’s export-related sectors may shed as many as 10 million jobs in the coming months due to a global recession and renewed U.S.-China trade tensions. Later in the second half, economic activity should be supported by domestic policy stimulus and a rebound in external demand when mobility restrictions are lifted (our base case). As GDP growth rebounds to 5% to 6% year-on-year in the second half, the labor market should improve, though fourth quarter employment could still be down by 15 million compared with the same period a year earlier.

How strong will consumption recover?

Consumption was hit hard by the coronavirus in the first quarter. Retail sales contracted sharply by 19% year-on-year, while the severe mobility restrictions related to the coronavirus hit some service industries — such as lodging and restaurants, retail and wholesale, transportation and travel — especially hard.

As mobility restrictions are lifted and services venues open, retail sales and consumer services have started to rebound. Retail sales narrowed their year-on-year decline in April to 7.5%, passenger traffic rebounded notably during the May 1 holiday from the Qingming holiday in April, and overall consumption during the May holiday surprised on the upside. Passenger car sales also rebounded strongly in April as pent up demand was released, improving from a 45% drop in the first quarter to a 2.5% decline in volume terms.

We expect any direct income/consumption support to be limited, but do expect more general economic stimulus and improving labor market conditions. Consequently, we expect a modest decline in full-year real private consumption and a flat overall consumption in 2020.

What will be the impact on China’s debt and financial system?

Macro leverage is likely to jump notably in 2020. Shocks from the trade war and Covid-19 have derailed China’s deleveraging effort, as more credit is needed to stabilize the economy, especially in 2020.

In our base case, with the expected credit rebound of less than 12.5% and sliding nominal GDP growth, we see China’s total debt excluding the financial sector rising to 300% of GDP in 2020, a bigger increase than in 2015 and 2016 and in a sharp reversal of leverage control and decline since 2017.

The increase in debt is likely led by higher government debt (including implicit local debt) and corporate leverage, with the latter largely as a result of shrinking revenue and earnings.

As China’s growth slows in 2020 and regulators increase forbearance, the UBS banking team expects 5.8 trillion yuan ($812.5 billion) worth of nonperforming loans (NPL) to be recognized over the next few years. In particular, UBS sees a material uptick in banking sector’s NPL ratio to 3% by the end of 2020, from 1.9% previously.

Bank loans and credit related with privates enterprises or small and midsize enterprises (SMEs) face more NPL challenges, possibly contributing to 70% of new NPLs, due to slower work resumption than large firms, more vulnerable financials and more limited access to low-cost credit in light of the Covid-19 outbreak. Echoing this, smaller banks with more exposure to SMEs may suffer more, some of which may need recapitalization.

However, we don’t see imminent risk of systematic financial crisis. While many may worry about long-term implications of such a rapid debt increase on the economy and the financial system, we think the risk is still manageable in the short-term relative to other major developed and emerging market economies.