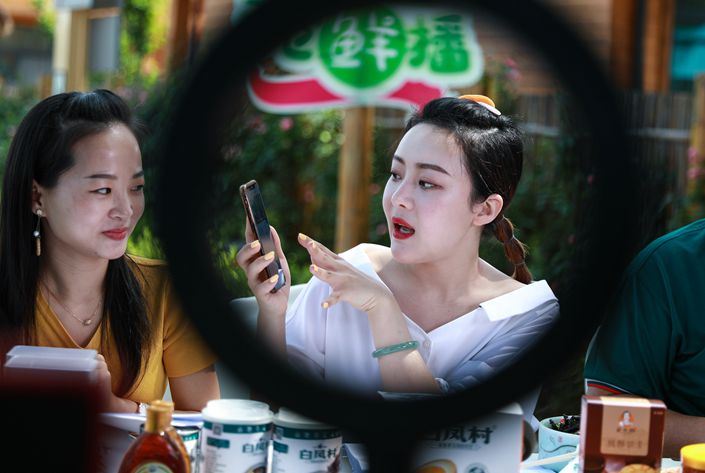 The livestreaming e-commerce sector was worth 433.8 billion yuan last year, according to a March report from the China Consumers Association.

Kuaishou has deepened its partnership with e-commerce giant JD.com Inc. in a bid to step up the Chinese video-streaming platform’s livestream e-commerce business.

The two companies’ latest partnership agreement, signed Wednesday, will allow users to buy products from JD.com within the Kuaishou app.

Also, during next month’s “618” annual sale, high-profile Kuaishou content creators, known in the industry as “key opinion leaders” (KOLs), will choose and promote JD.com products to their audiences during livestreams.

The two companies first partnered in June 2019, when KOLs began directing viewers to buy products on JD.com. But the latest tie-up comes after livestreaming e-commerce took off during the coronavirus pandemic, when consumers were stuck at home and physical stores were shut.

Over 4 million e-commerce promotional shows were livestreamed in the first quarter, according to the Ministry of Commerce, which also said that online sales of physical goods saw growth accelerate in the period.

The practice of selling products via livestreams has been around for a few years in China, but saw massive growth last year. Some popular livestreamers can end up selling so many items that the products they endorse end up going out of stock. The well-known chairwoman of appliance-maker Gree Electric Appliances Inc. of Zhuhai, Dong Mingzhu, earlier this month sold products worth more than 310 million yuan ($43 million) in a three-hour livestream on Kuaishou.

The livestreaming e-commerce sector was worth 433.8 billion yuan last year, according to a March report from the China Consumers Association (CCA), a government-backed watchdog.

According to a CCA survey of the users of livestreaming e-commerce platforms, Alibaba’s Taobao Live is the most-used platform, with 68% of those surveyed saying they had used it, followed by Douyin and Kuaishou. Taobao Live contributed $2.85 billion during the annual Double 11 sale last year.

Kuaishou’s tie-up with a veteran online retailer like JD.com will allow it to leverage its 300 million-strong daily active user base and make up for its lack of e-commerce experience and supply-chain infrastructure, analysts told Caixin.