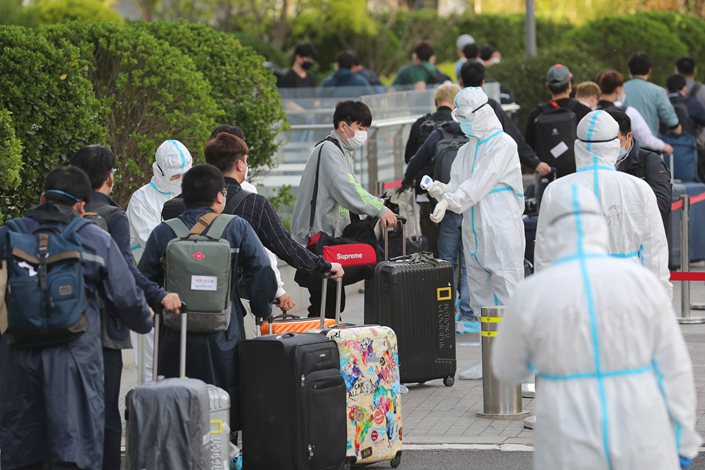 Travelers in Tianjin have their temperatures checked on May 10.

Two papers published today add to growing evidence that a significant portion of people infected with the novel coronavirus do not show symptoms, and may silently infect others.

The studies come as multiple nations begin to ease lockdown measures and restart their economies, and they illustrate the diversity of findings on the still poorly understood phenomenon of asymptomatic cases.

“COVID-19: in the footsteps of Ernest Shackleton” catalogs the plight of 217 passengers and crew on an isolated cruise ship that departed Argentina in mid-March on a quest to retrace the steps of the legendary Irish Antarctic explorer.

None aboard were found to have symptoms at the time of departure, and the first recorded fever among passengers emerged on day eight. Nucleic acid tests (NATs) delivered to the ship revealed that 59% of those on board were positive for SARS-CoV-2, the virus that causes Covid-19, by the 20th day of their journey.

A troubling four-fifths of those showed no symptoms, according to the Australian team behind the paper, which was published in peer-reviewed journal Thorax.

The second study, a peer-reviewed paper from Chinese researchers published in JAMA Network Open, reveals some of the clinical differences between symptomatic and asymptomatic cases of Covid-19.

Thirty-three or 42.3% of those in the observational study did not show symptoms of the disease such as fever, fatigue or dry cough. They tended to be women, were more likely to be younger, and seemed to experience less damage to their immune system than those with symptoms.

The median age of asymptomatic people in that study was 37, compared with 56 for symptomatic cases, a finding that broadly accords with previous research showing older people are worst affected by Covid-19 .

The study included 78 people who were either exposed to the Huanan Seafood Market, the first identified coronavirus cluster in Wuhan, or linked to someone diagnosed with Covid-19 in the city, between Dec. 24 and Feb. 24.

While such people were potentially infectious, they shed virus for a shorter period of time than symptomatic patients, the study concluded.

“Although patients who were asymptomatic experienced less harm to themselves, they may have been unaware of their disease and therefore not isolated themselves or sought treatment, or they may have been overlooked by health care workers and thus unknowingly transmitted the virus to others,” the researchers wrote.

The cases were revealed by a government screening program that tests close contacts of people with Covid-19 for SARS-CoV-2.

All subjects had their SARS-CoV-2 infection confirmed by a type of NAT, which looks for genetic traces of the virus. The researchers said they verbally obtained the informed consent of all involved in the study, and collected various clinical data including their swabs and CT scans.

The researchers said, however, that the clinical differences between the two groups “could have been more objectively observed.”

Scientists have found the proportion of coronavirus cases that are truly without symptoms tricky to measure, with research on the subject distorted by a reliance on self-reporting and a failure to closely follow people throughout the course of disease to see if they were truly symptomless, “pre-symptomatic,” or just had very mild symptoms.

Brian Oliver, a respiratory disease expert at the University of Technology, Sydney, said asymptomatic SARS-CoV-2 was “always expected, but it frightens public health officials, doctors and researchers because we do not know what this means for disease transmission.”

But he pointed out that if people are asymptomatic and do not have a runny nose or a cough, they are “unlikely to be a huge danger to society,” because those are key ways sick people spread the disease. On the other hand, people who don’t feel sick may be complacent about hygiene and social distancing.

The potential for people to unknowingly spread the new coronavirus has complicated public health efforts. While those without symptoms may transmit it less readily because they do not cough or sneeze infected droplets, the virus also appears to spread in other ways, such as on an individual’s breath and on infected surfaces.

The issue of asymptomatic infections has also been politically charged. On April 1, under mounting pressure and amid public calls for transparency, China’s National Health Commission finally began publishing a previously secret count of asymptomatic cases in its daily Covid-19 reports.

The count is kept separate from symptomatic cases.

Definitions and estimates of the prevalence of asymptomatic SARS-CoV-2 have varied widely: the World Health Organization maintains they are rare, but previous research from Italy has suggested up to 75% of cases could be asymptomatic.