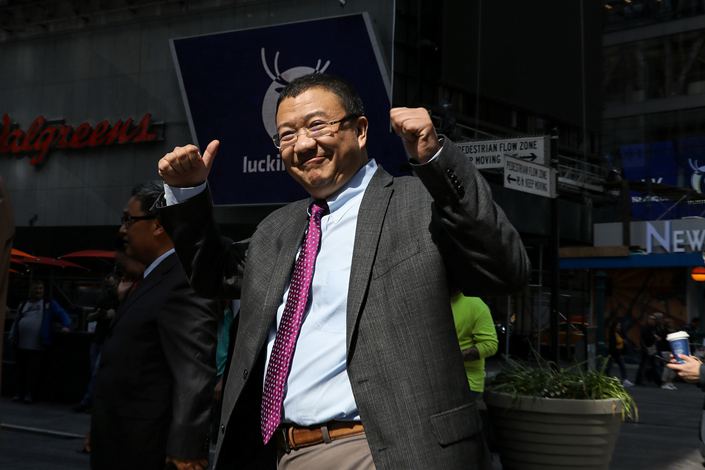 The founder of scandal-plagued chain Luckin Coffee Inc. has resigned from his roles at the rental car company that was once one of his main business interests, in the latest unraveling of the empire of Lu Zhengyao, who also goes by Charles Lu.

Car Inc., whose past and present investors have included the likes of Hertz and Warburg Pincus, said on Wednesday that Lu had resigned as a company director and its chairman effective June 9, according to a filing to the Hong Kong Stock Exchange on Wednesday. News of Lu’s departure sparked a rally for Car Inc.’s shares as investors welcomed the break between the company and its troubled founder.

But even after the 10% gain Wednesday in Hong Kong, Car Inc.’s shares still trade at about half of where they were before Luckin’s shock disclosure in early April that nearly half of the revenue it reported in the final three quarters of last year was fake.

Car Inc. said Lu was leaving the company “to devote more of his time to fulfill his commitments with Ucar Inc. and other businesses.” UCar is Lu’s limousine services provider that was previously the largest shareholder of Car Inc.

Car Inc. also noted that under a provision related to its borrowing, its lenders are entitled to demand immediate repayment of any outstanding loans if Lu leaves the company. It said such outstanding loans currently total about $168 million. “The company has not received any demand from the lenders for immediate repayment of such loans,” it said, adding that current managers are “in the process of obtaining waivers from the lenders.”

Car Inc. was once a centerpiece in Lu’s business empire, which initially focused on car services before he struck out to set up Luckin in 2017 with an aim of challenging Starbucks in China. Lu had maintained his influence over Car Inc. by holding about 26% of its shares through Ucar. Of the three companies, only Car Inc. is profitable. Ucar has been losing money for the last three years, and Luckin is also losing large sums due to its short history and rapid expansion.

As Luckin began to unravel after announcing its fraud and Ucar also came under financial stress from an unrelated earlier deal to acquire the once-prominent but now nearly defunct German car brand Borgward, Lu began raising cash by selling down Ucar’s stake in Car Inc.

First, Ucar sold 4.65% of Car Inc.’s shares to Warburg Pincus, one of Car Inc.’s early investors, back in April several weeks after the Luckin scandal erupted. At the start of this month, Beijing Automotive Group Co. Ltd. (BAIC Group), a major carmaker whose joint venture partners include Germany’s Daimler AG, agreed to buy the remaining 21.26% of Car Inc’.s shares held by Ucar, Car Inc. said in a stock exchange announcement at that time.

That pair of deals would have raised about $130 million for Ucar and Lu, based on Caixin’s calculations at the time the two separate deals were announced.

The BAIC sale would have ended the financial relationship between Lu and Car Inc. A high-level executive at Luckin previously told Caixin that Lu and other top executives at Car Inc. were already considering leaving their management positions at the company.

If the BAIC share purchase is completed, it would leave BAIC as Car Inc.’s second biggest shareholder behind Legend Holdings, parent of PC giant Lenovo, which owned 26.6% when Car Inc. filed its latest annual report on April 1.

Lu’s departure from Car Inc. also comes as his position as Luckin chairman looks increasingly tenuous. Luckin originally blamed its COO and some of his subordinates for the fraud, equal to more than $300 million in fake sales. Later, Luckin fired both the COO Liu Jian and CEO Qian Zhiya, who also goes by Jenny Qian. But it retained Lu, who said he had no knowledge of the fraud, as its chairman.

But a source close to domestic regulators that are now investigating Luckin told Caixin over the past week that Lu is likely to face criminal charges in China after authorities discovered emails in which he instructed colleagues to commit fraud.