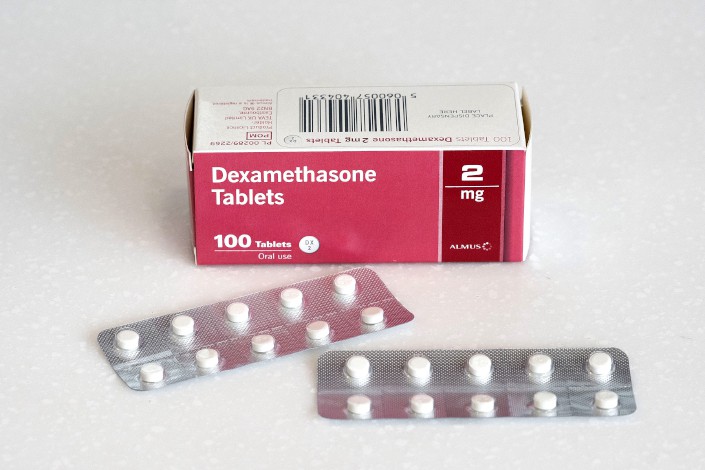 In 1977, dexamethasone was added to the WHO’s Model List of Essential Medicines, a list of safe and effective drugs the organization considers vital to a basic health care system.

It may not be flashy or have big pharmaceutical backers, but an old, cheap and widely available steroid is showing it can keep some of the sickest coronavirus patients from dying, U.K. researchers say.

Medical experts who typically shy away from such language are hailing “breakthrough” results from a randomized controlled trial of the broad spectrum corticosteroid dexamethasone, which researchers said cut the risk of death for Covid-19 patients on ventilators by one-third.

“Dexamethasone is the first drug to be shown to improve survival in Covid-19. This is an extremely welcome result,” said Oxford University infectious diseases Professor Peter Horby, who helped lead the trial that is yet to be peer-reviewed. He said the drug should become a standard treatment for coronavirus patients who need medical assistance to breathe.

“Dexamethasone is inexpensive, on the shelf, and can be used immediately to save lives worldwide,” Horby said.

The promising results come as people from the medical and pharmaceutical industries race to find drugs that can treat the virus that has killed more than 435,000 people.

The World Health Organization (WHO) and other experts welcomed the news. WHO Director-General Tedros Adhanom Ghebreyesus congratulated the researchers in a statement and called the findings a “lifesaving scientific breakthrough.”

Gaetan Burgio, an immunologist at the Australian National University, said it was “an important and significant result” that would “save lives.”

But Ian Musgrave, a medical professor at the University of Adelaide, said caution was needed until the researchers opened the data up for scrutiny, because “so far we only have press releases to go on.”

“The actual study data have not been released so this needs to be examined carefully. The retracted Lancet paper on hydroxychloroquine has taught us that lesson,” he added. The influential Lancet medical journal retracted a major study on the malaria drug’s effects and side-effects this month after questions about the evidence underpinning it.

Musgrave added that as a powerful immune suppressant, dexamethasone needed to be "used with care,” and only for the most severe cases of Covid-19.

In the dexamethasone trial, researchers gave 2,100 randomized coronavirus patients 6 milligrams of dexamethasone once per day, either by mouth or intravenously, for 10 days. Their outcomes were compared with 4,300 other control patients.

Allen Cheng, an infectious disease specialist at Alfred Health in Melbourne, echoed the need for complete data, but said the conclusions fit a theory about what kills some of the sickest Covid-19 patients: an immune response so powerful it damages the body.

“It’s quite a curious illness. People get sick, but then in the second week they get all this inflammation, and we don’t really know what’s causing that. It looks like (dexamethasone) might dampen down some of the inflammation,” Cheng said.

He said the results were “surprising” because steroids were tried on patients with SARS and MERS, two previous deadly coronaviruses, and they didn’t work. “It even looked like they might have made things worse,” he said.

Cheng compared the drug with Gilead Sciences’ experimental drug remdesivir, which has been approved for Covid-19 in many jurisdictions after a U.S. trial suggested it had some benefit for recovery times but little impact on death rates, which stood at 8% of patients given remdesivir compared with 11.6% for the placebo group.

A separate study in China on remdesivir found the drug had little or no effect in treating patients with Covid-19.

Andrew McLachlan, dean of the University of Sydney’s Pharmacy School, said the fact that the dexamethasone findings came from a “high quality trial with rigorous study design, appropriate controls and a significant sample size” gave them credibility.

Dexamethasone is being tested as part of the Recovery trial, an Oxford University-backed initiative launched in March by the school’s Nuffield Department of Population Health and the Nuffield Department of Medicine. It involves thousands of U.K.-based medical practitioners and researchers who are testing drugs already on the market to see if they could work for Covid-19.

Such an approach is often preferable to using experimental drugs whose risks and side effects are unknown. Existing drugs are also likely to be already in mass production, cheaper and more accessible.

Other treatments being tested include the HIV drug combination Lopinavir-Ritonavir, the anti-inflammatory Tocilizumab, and antibody-rich blood plasma collected from recovered Covid-19 patients. The group previously aborted a hydroxychloroquine trial after they found it had little effect.

In 1977, dexamethasone was added to the WHO’s Model List of Essential Medicines, a list of safe and effective drugs the organization considers vital to a basic health care system. It is used mainly to control inflammation in a range of autoimmune diseases and cancers.

A small study published in May on a different steroid, methylprednisolone, also found benefits for that drug.