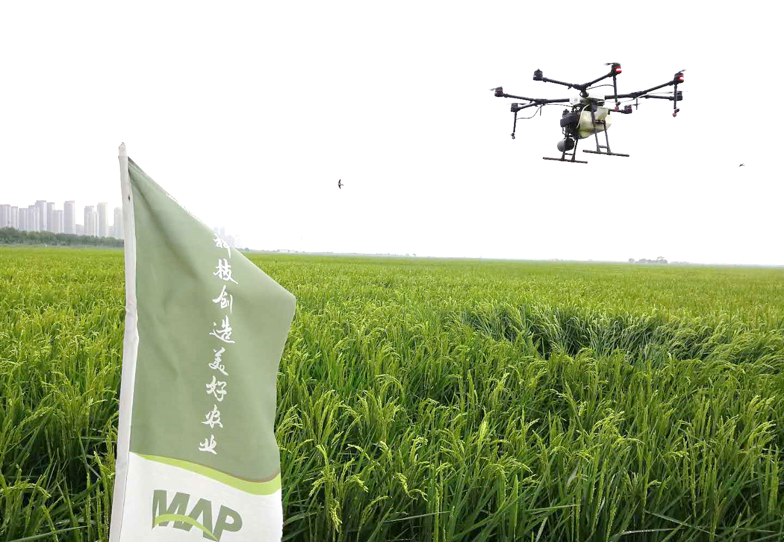 A drone flies over a Syngenta rice field. Photo: Syngenta

Agrochemical giant Syngenta Group Co. Ltd. has officially debuted as part of China’s government-led mega-merger of two dominant state-owned chemical companies ahead of a possible IPO in China by mid-2022.

The newly formed company Syngenta, which was registered last year, evolved from the Swiss pesticide producer that China National Chemical Corp. (ChemChina) acquired in 2017 and took in agricultural assets from ChemChina and Sinochem Group.

In a statement announcing its launch Thursday, Syngenta said its first-quarter revenue was $6.3 billion, of which about a quarter was generated in China. The company last year surpassed Bayer AG to become the biggest agrochemical company in the world, racking up $23.2 billion in revenue.

ChemChina acquired Syngenta AG, the predecessor of the newly launched company, for $43 billion in 2017 in the largest ever overseas acquisition by a Chinese firm. As part of efforts to reduce ChemChina’s debt after the takeover, it has been working through a merger with state-owned rival Sinochem. In January, the two Chinese state-owned chemical giants announced they would consolidate their agriculture chemical assets into the newly formed Syngenta Group as part of their ongoing restructuring plan.

In addition to the two parent groups’ agricultural chemical assets, Syngenta Group also holds a 100% stake in Syngenta AG and a 74.02% stake in ADAMA Ltd., a Shenzhen-listed Israeli pesticide producer that ChemChina acquired in 2017. According to the Thursday statement, Syngenta Group makes most of its revenue from sales of pesticides, seeds and fertilizer.

Multiple analysts told Caixin the company is ramping up efforts to expand its China business. Demand for advanced pesticide remains strong in China, compared with markets such as the U.S. and Brazil, two major crop exporters, where such products already in wide use. In a January research note, Credit rating agency Fitch said China is expected to contribute about 20% of Syngenta’s total revenue in the coming years, up from just 2.3% in 2018.

But a strategy reliant on growth in China could face headwinds as the Chinese government continues to crack down on the overuse of pesticides in an attempt to combat pollution. China’s annual pesticide output dropped to 2.1 million tons in 2018, down 44.3% from 2015, according to data from the National Bureau of Statistics. In 2019, the average profit of 719 domestic large and midsize pesticide companies was 27.5 million yuan, down 6.6% from the prior year, official data (link in Chinese) showed.

Syngenta will seek to go public in China by mid-2022, the company told Caixin in February. The move would broaden its access to financing and alleviate some of the debt pressure on ChemChina.