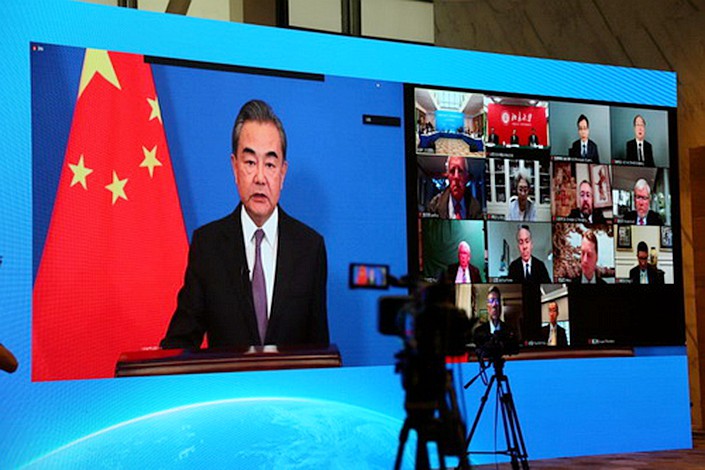 China’s foreign minister said Thursday that Sino-American relations are facing their “most severe challenge” since the establishment of diplomatic ties in 1979, calling on the U.S. to resume official talks to review red lines in their relationship.

Speaking at a China-U.S. think tanks and media forum in Beijing via video link, Wang Yi, China’s top diplomat and state councilor, said that “China-U.S. relations, one of the most consequential bilateral relationships in the world, is faced with the most severe challenge since the establishment of diplomatic ties.”

In portraying China as “an adversary, and even an enemy,” Washington has sought “relentlessly to frustrate and contain China’s development, and to impede interactions between China and the U.S.,” Wang said.

Wang urged the U.S. to reestablish existing mechanisms for discussions with China “as soon as possible” in order to review their relationship, including listing areas of cooperation and “tough issues that the two countries have little chance to agree on in the near future.” He didn’t elaborate on China’s red lines.

“The two sides should manage them well in the spirit of seeking common ground while putting aside differences, so as to minimize their impact on and harm to the overall China-U.S. relations,” he added.

The two countries had established four high-level dialogue mechanisms during a summit between Chinese President Xi Jinping and his U.S. counterpart President Donald Trump in April 2017, covering the subjects of diplomatic security, economic relations, cyber and law enforcement, and culture.

Those dialogues have been suspended amid deteriorating relations between the world’s two largest economies over a series of economic and geopolitical disputes. The two countries last held one of the dialogues in November 2018, when top diplomats and defense chiefs from both sides met in Washington.

In Beijing, the foreign minister’s remarks came days after his American counterpart, U.S. Secretary of State Mike Pompeo, threatened to block several Chinese social media apps, including the short video application TikTok, due to concerns — claimed by Pompeo and denied by TikTok — that the apps left Americans’ “private information in the hands of the Chinese Communist Party.”