Five Things to Know About Trump’s Policies Toward International Students 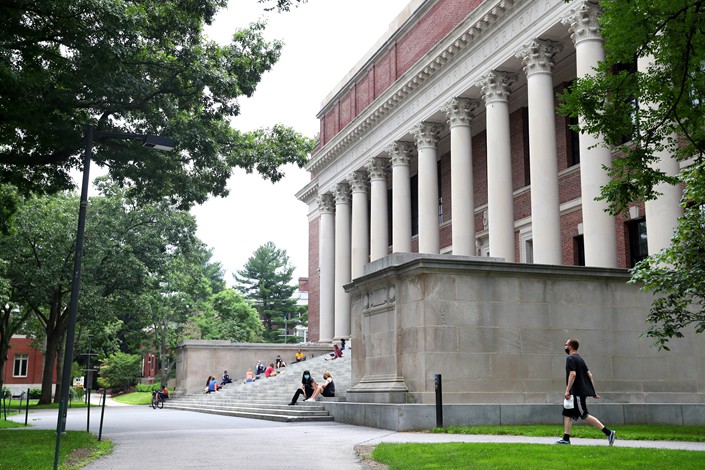 A student walks through the Harvard University campus in Cambridge, Massachusetts, on Wednesday.

Hundreds of thousands of international students have been caught on the horns of dilemma as the U.S. has repeatedly placed hurdles and restrictions in the way of those looking to study in the country.

Here are a few essential things to know about what has changed for international students in the U.S.

What has happened to international students taking online-only courses?

On Monday, the U.S. Immigration and Customs Enforcement (ICE) agency announced that if universities in the U.S. hold online-only classes this fall — a choice many institutions are making during the Covid-19 pandemic — international students on academic study visas must leave the country.

If they do not do so, or take other measures such as transferring to a school with in-person instruction, they may face “immigration consequences including, but not limited to, the initiation of removal proceedings.” Or, in other words, they could be deported if they do not attend in-person classes.

This policy could impact more than 1.1 million foreign students who currently hold active student visas in the country, including hundreds of thousands Chinese students.

On Wednesday, Harvard University and the Massachusetts Institute of Technology, filed a lawsuit in a Boston federal court against the Department of Homeland Security (DHS) and ICE, seeking a temporary restraining order and a preliminary injunction to stop the policy from being enforced. The case is expected to be ruled on as early as Wednesday.

The following day, a Harvard-bound freshman was prevented from boarding a plane to the U.S. at an airport in Minsk, Belarus, due to the ICE order.

How will Trump’s suspension of work visas affect foreign graduates?

On June 22, U.S. President Donald Trump issued an executive order suspending certain types of work visas, including H-1B visas for highly-skilled workers, until the end of the year. He also extended a ban on the issuance of certain green cards on Monday, which was originally issued in April.

The visa restrictions could make foreign students less interested in applying to U.S. universities, as the order diminished their prospects of being able to work in the country after graduation. But Trump has left the Optional Practical Training program intact, which serves as transition from student visas to H-1B ones, giving fresh graduates up to 24 months to find a job in the country.

Why does Trump want to expel Chinese graduate students with a military background?

On May 29, President Trump issued a proclamation suspending U.S. entry for Chinese students and researchers “with ties to Chinese military schools.” A list of affected “military schools” was not provided.

According to the Trump administration, the restriction is mainly targeted at students who have studied at universities that “implement or support” Beijing’s military-civil fusion strategy, and “acquire and divert the world’s cutting-edge technologies” in order to “achieve military dominance,” all of which is denied by Beijing.

On June 11, Wang Xin, a Chinese scientific researcher at the University of California, San Francisco, was arrested at Los Angeles International Airport while trying to leave the United States. He was charged with visa fraud and hiding his position in the Chinese People’s Liberation Army, which was equivalent to the level of major. China’s foreign ministry spokeswoman has accused the U.S. of “political persecution” in response.

Why did the U.S. shorten visas issued to Chinese students studying advanced technologies?

Since June 2018, the Trump administration has reportedly started to shorten the length of validity for visas issued to Chinese students in some science, technology, engineering and mathematics fields, to battle alleged theft of U.S. intellectual property. The policy shortens the duration of visas from five years to one year for Chinese studying for a masters or doctorate in robotics, aviation and high-end manufacturing.

The 2018-2019 academic year was the 10th in a row that China was the top contributor of international students in the U.S. Around 370,000 Chinese students enrolled in the U.S. colleges and universities in that academic year, accounting for about one-third of foreign students, according to the Institute of International Education.

If Trump’s restrictions slash foreign student enrollment this fall, higher education institutions could find a huge hole in their budgets.

Many American universities already face pandemic-related financial woes and have curtailed expenses by freezing pay and laying off staff. According to the National Association of Foreign Student Affairs, falling international student numbers in the next academic year could cost U.S. higher education at least $3 billion in revenue.