Trending in China: Liquor-Maker Moutai Falls from Heady Heights Due to Media Dig at its Corrupt Past 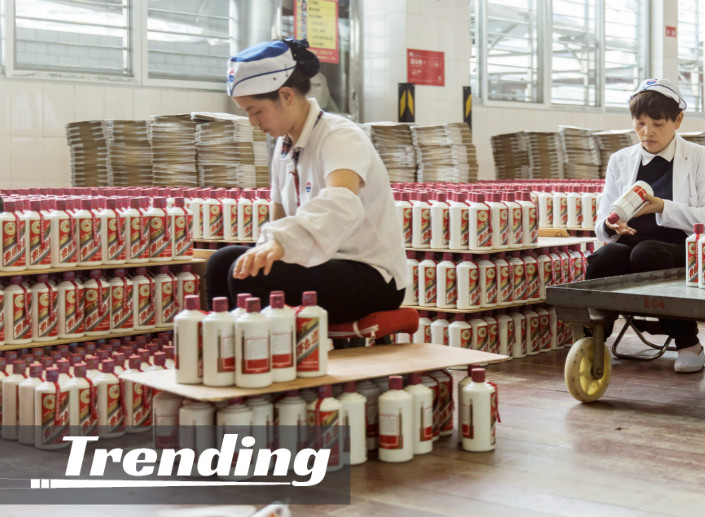 In a superlative case of crashing confidence, stock market favorite and world’s most valuable liquor company Kweichow Moutai has plummeted as much as 8.7% Thursday on the Shanghai Exchange. The state owned “baijiu” producer is the mainstay of the Shanghai Composite Index, which fell 4.2%, and northbound foreign capital funds that began to think twice about China’s bull market as early as July 10. Known as a maker of liquor for banquets and high-level business deals, Kweichow Moutai has needed to dig itself out of trouble several times in the past decade, in the context of an anti-corruption political campaign and a series of internal corruption scandals.

Thursday’s fall marks a rapid retreat from a recent record set just weeks ago and was viewed by 100 million Weibo users, as netizens began a backlash against bullish sentiment expressed in hashtags such as #BullMarketIsHereHahahahaha.

Xueqiu, an independent media blog, reported Thursday that the state-run People’s Daily new media platform “Learning Group” published a post, “Moutai smells bad. Who’s getting the check?” asking if the liquor “maotai” was still a currency of corruption and saying it “should be for drinking rather than for stirring up the stock market or absorbing the rot.” The harsh post reminded readers of the corruption case of Yuan Renguo, former chairman of the alcohol company, and that at least 13 other executives had been investigated since Yuan Renguo's fall. The attack on Moutai is likely a sign that the government wants to cool the recent stock rally.

Animal and vegetable analogies abound as Weibo users try to describe the stock market flop. One user wrote, “after the rampage, all we’re left with is chicken feathers.” Many described the fate of investors as that of garlic chives or jiucai, ever at the mercy of being made into dumplings.

One popular Weibo account recounted how the past week in China must have felt for newbie stock investors: A week of stock-related joy, a couple of days in tears, and now being trampled all over.

Some compared the news with the wildly popular IPO of a leading semiconductor chipmaker that took place Thursday, saying “Has the money all gone into semiconductor chips now?” In a strongly nationalistic comment, one Weibo user declared that, “In the end, Moutai will be stronger than chips. Chips aren’t ours, they need an industry to thrive.” Indeed, baijiu is only popular in China, despite the volume sold in global terms.