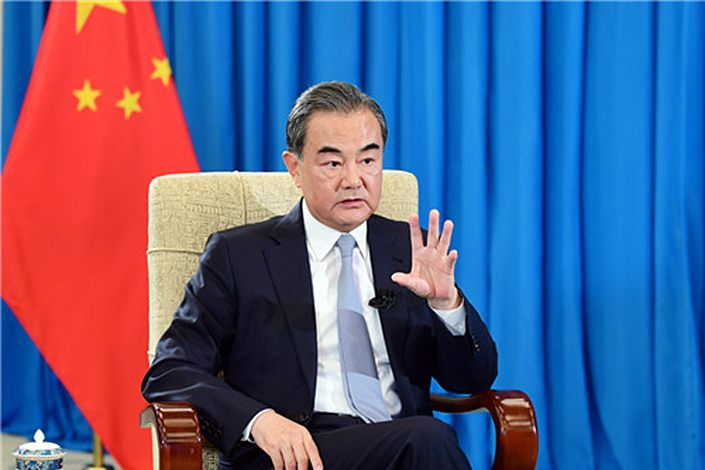 Foreign Minister Wang Yi said China rejects any attempt to create a “new Cold War” and urged a resumption of talks with the United States at any level about any issue, as the relationship between the world’s two biggest economies hits its lowest ebb in decades.

In a wide-ranging interview with the official Xinhua News Agency on Wednesday, the state councilor and top diplomat said China “is not the former Soviet Union” and has “no intention of becoming another United States.”

China “rejects any attempt to create a so-called new Cold War,” Wang added. “Anyone who tries to start a new Cold War in the 21st century will be on the wrong side of history and will only be remembered as the one who has upended international cooperation.”

Wang’s remarks came as tensions between the U.S. and China have dramatically escalated in recent months on multiple fronts, including trade, technology, diplomacy, and the Covid-19 pandemic. The latest salvo was on Sunday when Washington gave Chinese company ByteDance Ltd. just 45 days to sell its popular social video app TikTok.

Faced with the heightened tensions, Wang again called for “candid, effective” consultation with the U.S. as China is “ready to restart dialogue mechanisms with the U.S. side at any level, in any area and at any time.”

“All issues can be put on the table for discussion,” he stressed.

The bilateral high-level dialogue mechanisms, which have been suspended amid rising tensions, were established by Chinese President Xi and U.S. President Donald Trump during a summit in 2017.

China’s message, as Wang concluded, is “quite clear.”

“We urge the U.S. to stop acting with arrogance and prejudice but enter into constructive dialogue with us on an equal footing,” he said, adding that China will also “make cool-headed and sensible responses to the impulsive moves and anxiety of the U.S. side.”

China and the U.S. are facing “the gravest challenge” since the two big powers normalized diplomatic ties in 1979, Wang said. He decried “some American politicians who are biased against and hostile to China” as the root cause of the deteriorating ties.

“What they want is to revive McCarthyism” in an attempt which will “plunge the world into chaos and division again,” he said.

Bracing for “possible bumps and storms ahead,” Wang said China will “firmly defend” its “sovereignty, security and development interests,” while in the meantime it is always ready for a conflict-free China-U.S. relationship and win-win cooperation.

When asked about the tit-for-tat closures of consulates last month, Wang said China has no intention to fight a “diplomatic war” with the U.S. and triggering the war could only expose Washington's “increasing lack of confidence.”

“If the US is bent on going down the wrong path, China is ready to make due response,” he added.

In the interview, Wang proposed a four-point “clear-cut framework” to deal with “the most complex situation” in bilateral relations. The first point was to steer clear of each country’s red lines and avoid confrontation. Wang said China never intends to interfere in U.S. elections and internal politics, and neither should the U.S. meddle in China’s domestic affairs.

The second was to keep channels open for candid dialogue, while the third was to reject “decoupling” and uphold cooperation.

“Forced decoupling will inflict a lasting impact on bilateral relations and endanger the security of international industrial chains and the interests of all countries,” Wang said.

The last principle suggested the two major countries abandon a “zero-sum mentality” and stand up to shared responsibilities for global issues such as the Covid-19 pandemic. Wang also pointed out the “real challenge” the U.S. has posed to the current international order, such as withdrawing from the World Health Organization.

By contrast, China “must not allow the international system to be undermined arbitrarily, or the world divided again,” vowed Wang.