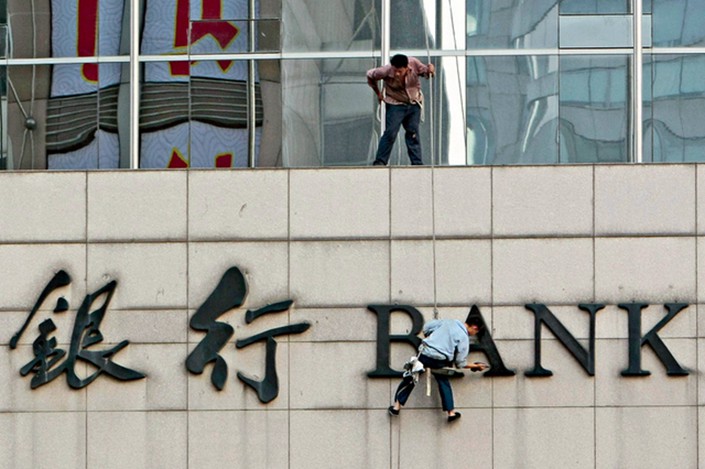 China is considering loosening planned regulations for how commercial banks must classify their nonperforming assets.

China’s banking watchdog may loosen proposed regulations for how commercial banks classify their nonperforming assets, Caixin has learned, marking a victory for lenders who complained that draft rules published last year would be difficult to follow given their growing financial stress amid the country’s slowing economy.

The 2019 draft regulations covered a wide range of elements, including extending the scope of financial assets subject to a standard five-category classification system.

The system, which previously only applied to banks’ loans in China, would include nonloan assets such as bonds and receivables — payments a company expects to receive from another, according to the draft rules. They also specified that banks should classify all financial assets more than 90 days overdue as nonperforming.

Some banks have already begun to implement the draft rules, according to people familiar with the matter. The new rules were drafted in an attempt to force banks to come clean about their asset quality to curb financial risks. Even though they’ve not officially come into force, they’ve already contributed to a spike in banks’ nonperforming assets, which has hit some lenders’ profits.

Before the Covid-19 pandemic, commercial banks’ nonperforming assets would surge 60% if the 2019 draft rules were applied to the entire sector, with small and midsize banks reporting greater growth, sources with knowledge of the matter said, citing the banking regulator’s estimate. However, the figure would likely exceed 60% due to the pandemic’s negative impact on banks’ asset quality.

Official data showed (link in Chinese) that by the end of March, Chinese commercial banks’ outstanding nonperforming loans rose to 2.6 trillion yuan ($372.3 million), up 198.6 billion yuan from the end of last year.

To cover potential losses from nonperforming assets, commercial banks are required to set aside an amount of cash, which is called loan-loss provisions. However, some banks, especially small and midsized ones, have limited capability to replenish loan-loss provisions in response to rising bad debts amid the pandemic, a spokesperson with the China Banking and Insurance Regulatory Commission (CBIRC) said last month. The sector as a whole has a 350 billion yuan loan-loss provision shortfall, the spokesperson said.

Before the coronavirus outbreak, regulators already considered loosening the requirements for bad-asset classification in the final version of the draft rules, the sources said.

The sources said regulators will likely increase the ceilings for assets classified as suspicious and as a loss to 50% and 90% of original book value lost, respectively, given the pressure on banks amid the economic slowdown.

Also, the 2019 draft said that if 5% of a nonretail client’s debts to a bank were nonperforming, the bank was required to classify the other 95% of the borrower’s debts as nonperforming as well, even if those debts did not incur any losses or were not overdue. The rule is similar to the international banking requirements laid out by the Basel Committee on Banking Supervision, a global standard-setter for prudential regulation of banks.

The sources said the final rules will likely raise the ceiling to 10%. Besides, some creditworthy small and micro enterprises may be exempted from the rule when taking out bank loans, they said. It is obvious that regulators are encouraging lenders to boost liquidity for the small businesses in particular, said Ren Tao, a researcher with Xiamen International Bank Co. Ltd.

However, it is necessary for banks to distinguish companies that experience short-term difficulties amid the pandemic from those problematic ones who have high operational risks, said the CBIRC spokesperson.

In addition, the 2019 draft said banks should classify financial assets more than 270 days overdue as suspicious and those more than 360 days overdue as a loss. Regulators will likely to raise the thresholds for assets recognized as suspicious and as a loss to 360 days and 720 days, respectively, as some banks complained it is hard to recover bad loans within 360 days.

Some hidden loan risks are yet to be fully exposed thanks to macroeconomic policies rolled out in recent months in response to the pandemic’s impact, the CBIRC spokesperson said, warning of a potential “significant rebound of nonperforming loans.”

An accurate classification of banks’ nonperforming loans would help regulators grasp the reality of the financial landscape and roll out targeted measures to curb bad loans, Xiao Yuanqi, chief risk officer of the CBIRC, said at a meeting last month.

As rising bad debts have put pressure on lenders’ financial status, regulators are encouraging banks to replenish their capital by issuing new shares or bonds.