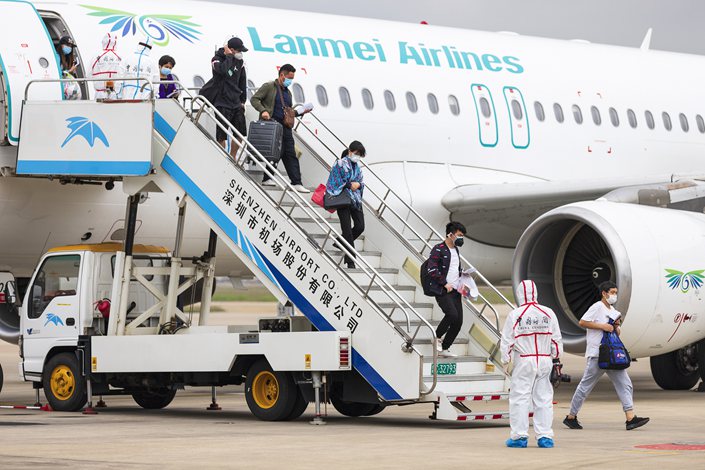 The new rule change ends a measure imposed in March, which limited all international flights to a 75% occupancy rate as part of measures to curb the spread of the virus.

China is allowing inbound international flights to be more than three-quarters full, as long as the flight isn’t from a high-risk area and the carrier hasn’t brought anyone with the novel coronavirus into the country for three weeks.

The new rule change ends a measure imposed in March, which limited all international flights to a 75% occupancy rate as part of measures to curb the spread of the virus.

The occupancy restriction will remain in place for flights departing from areas deemed high-risk, the Civil Aviation Administration of China (CAAC) said on Monday.

Airlines will also need to abide by the 75% restriction if they exceed a limit on the number of passengers who test positive for Covid-19 on arrival. Carriers which bring five such passengers into China in any three-week period are subject to a one week suspension of their China routes.

As of Sept. 1, CAAC has suspended 31 routes since the introduction of the measure.

The easing of occupancy limits comes after China’s six listed airlines, including the “big three” of Air China, China Southern Airlines and China Eastern Airlines, posted a combined loss of 39 billion yuan ($5.7 billion) in the first half of the year. Hainan Airlines alone reported a loss of 11.8 billion yuan.

But restrictions on passengers show no signs of loosening. People in nine countries, including France, Canada and New Zealand, now must take a Covid-19 test 3 days before they board a flight to China, tightening the previous 5-day rule, according to a statement released by the Chinese Embassy in New Zealand on Friday.

The statement also said Chinese embassies in other countries, besides the nine already listed, will soon enforce the new 3-day test requirement, without giving a specific date for implementation.