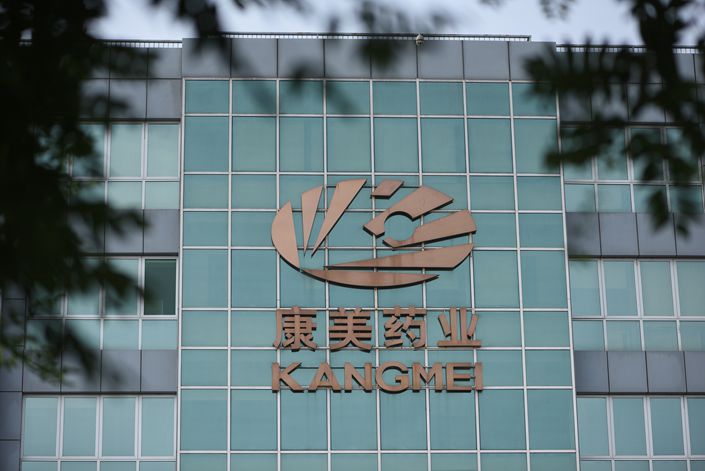 Kangmei’s headquarters in Beijing on June 7.

The battle to save one of China’s largest listed pharmaceuticals companies took another step forward this week as a special purpose vehicle set up by local state-owned enterprises (SOEs) agreed to take control of the scandal-hit business for two years under a rescue orchestrated by the Guangdong provincial government.

Kangmei Pharmaceutical Co. Ltd., whose survival has been in question since the revelation of a $12.9 billion fraud in 2019, announced on Thursday that it had signed several agreements with Jieyang Yilin Pharmaceutical Investment Co. Ltd., an entity formed in August that is controlled by the Jieyang city and Guangdong provincial governments through the SOEs.

Under the agreements, Kangmei Pharmaceutical’s controlling shareholder, Kangmei Industry Investment Holdings Co. Ltd., will transfer the voting and other rights attached to a 29.9% stake in the firm to Jieyang Yilin, which will act as a custodian, according to a filing (link in Chinese) to the Shanghai Stock Exchange. Kangmei Industry, the company’s former chairman Ma Xingtian, who was taken into police custody in July, and several other shareholders will give up their voting rights on a further 8.38% holding. The special purpose vehicle will effectively become the temporary controlling shareholder and will also take over the management of Kangmei’s business and debt, but won’t assume any of its liabilities.

The agreements, which Kangmei signed (link in Chinese) on Wednesday, are valid for 24 months, although there is an option to extend them. Kangmei will need to pay Jieyang Yilin a custodian fee of 4 million yuan ($585,000) every six months, and at the end of the custody period, Jieyang Yilin will be paid a bonus based on the value of the stake under its control and the debt attached to shares pledged by Kangmei Industry.

Shares in Shanghai-listed Kangmei Pharmaceutical, which had been suspended since July 23 pending news of a “major event” that could lead to a change in control of the company, jumped by their maximum daily limit of 5% when they resumed trading (link in Chinese) on Thursday, closing at 3.1 yuan, the highest since April.

Shareholders and creditors of Kangmei Pharmaceutical, which employs around 9,000 people, have been expecting a state orchestrated rescue of the debt-ridden company since July. Sources previously told Caixin that the Guangdong provincial government had proposed naming Guangdong Hengjian Investment Holding Corp., a state-owned investment holding company, as custodian to hold the controlling shareholder’s voting rights.

But that plan seems to have foundered and the government has chosen an alternative route to try and save the company while also minimizing its liability for its debts.

Yilin has not carried out any due diligence on Kangmei, and it will not guarantee any of the company’s liabilities, Kangmei said in another Thursday filing (link in Chinese). It remains uncertain if the implementation of the terms of the agreements will lower the company’s risks or improve its operational and financial situation, it warned.

Kangmei’s creditors are reserving judgement over the deal. “We still need to observe how the takeover goes, see if there’s any liquidity support for Kangmei and if there will be any moves to restructure the company,” one institutional bondholder said.

The government has stepped in as Kangmei sinks deeper into financial trouble following its admission in April 2019 that “accounting errors” caused a 29.9 billion yuan overstatement of its cash holdings. In May, it was fined 600,000 yuan by the securities regulator after an investigation found it had overstated its cash holdings by 88.7 billion yuan from 2016 to 2018 by inflating revenues and fabricating bank deposits.

At the end of June, Kangmei held about 361 million yuan in cash, and its interest-bearing debt amounted to about 33.3 billion yuan, the company said in Thursday’s filing. The company has a large amount of debt, lacks liquidity, and faces risks of being sued over its previous lack of compliance with information disclosure requirements, the company said.