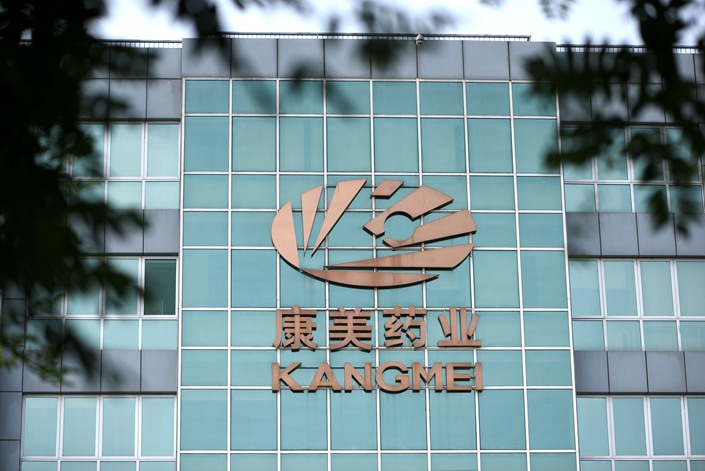 Embattled drugmaker Kangmei Pharmaceutical Co. Ltd., which is set to be restructured after a $12.8 billion fraud, went into technical default on one of its bonds this week after interest payment due on the debt was not received on time by the clearing house that processes the funds.

Money-losing Kangmei, whose Shanghai-listed shares are suspended (link in Chinese) pending news of a possible restructuring orchestrated by its parent company, was on Monday due to pay interest of 105.8 million yuan ($15.3 million) on a five-year 2 billion yuan medium-term note that carries a coupon rate of 5.29%. However, the Shanghai Clearing House, through which the payment should be routed, issued a statement (link in Chinese) that evening saying it hadn’t received the money to enable it to pay bondholders.

Kangmei, one of China’s largest listed pharmaceuticals makers, announced (link in Chinese) on Tuesday that it had transferred the money on Monday to the designated account but due to “operational errors by financial personnel” the funds hadn’t been received by the Shanghai Clearing House. The payment was completed on Tuesday.

Although the delay appeared to be a false alarm and did not trigger any cross-default clauses, giving some relief to creditors, it underscores the precarious state of Kangmei’s finances. The company reported a net loss of 4.7 billion yuan in 2019 and its revenue fell 32.9% to 11.4 billion, according to its annual report (link in Chinese). In May, it was fined 600,000 yuan by the securities regulator after an investigation found it had overstated its cash holdings by 88.7 billion yuan from 2016 to 2018 by inflating revenues and fabricating bank deposits.

Chinese bond investors refer to delayed payments caused by issues such as errors in money transfers as “technical defaults.” The meaning of the term differs from its normal use in international markets, where a technical default refers to situations where an issuer failing to uphold certain aspects of the legal agreement between bond issuers and bond holders.

A source close to Kangmei told Caixin that the company was forced to collect funds urgently from customers who owed it money to pay the interest due. This is not the first time Kangmei has been forced to go cap in hand to its customers. In February 2019, the Guangdong provincial government leant on local hospitals to immediately pay the money they owed the company so that it could repay about 2 billion yuan of principal and interest on a short-term bond.

Kangmei is sinking deeper into financial trouble following its admission in April 2019 that “accounting errors” caused a 29.9 billion yuan overstatement of its cash holdings. An investigation by the China Securities Regulatory Commission subsequently found that the company engaged in a series of illegal activities including forging documents for nonexistent business activities leading to an overstatement of cash holdings amounting to 88.7 billion yuan from 2016 to 2018.

The company’s then chairman, Ma Xingtian, said the errors resulted from loopholes in internal controls and financial management. In July, the police took what’s known as compulsory measures against Ma on suspicion of illegal disclosure of information and failure to disclose important information. Compulsory measures usually mean arrest, detention or home surveillance.

Kangmei said on July 23 that its controlling shareholder, Kangmei Industry Investment Holdings Co. Ltd., was planning a “major event” that might lead to a change in control and subsequently requested its shares be suspended until Sept. 3 at the latest. Sources close to the matter have previously told Caixin that the Guangdong government is putting together a takeover of the company and that Guangdong Hengjian Investment Holding Corp. has been selected as its new custodian. Details haven’t been finalized, but one option on the table is to have Hengjian hold the controlling shareholder’s voting rights in Kangmei, one of the sources said.

Denise Jia and Liu Jiefei contributed to this report.