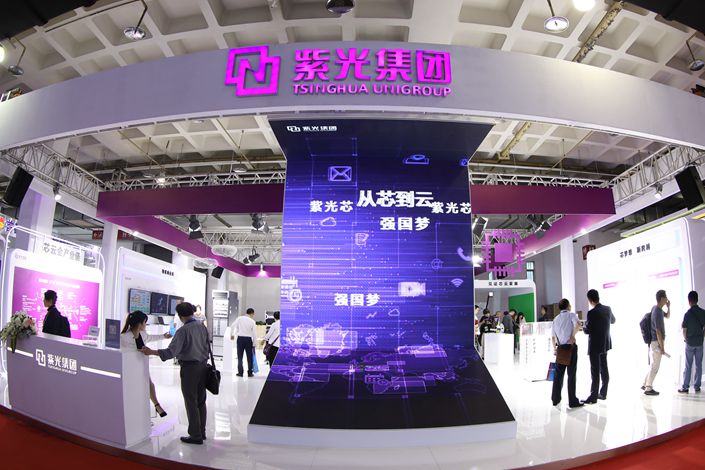 As part of China’s plan to build a world-class semiconductor industry, Tsinghua Unigroup has received billions in funds from government-backed investors.

The dollar bonds of state-owned chipmaker Tsinghua Unigroup Co. Ltd. have fallen steeply in recent weeks, as investors worried about the money-losing firm’s ability to repay billions in debt coming due in the latter half of the year.

The value of a $1.5 billion bond due next year fell nearly a quarter from mid-August to 68.07 cents on the dollar, edging up 0.47% on Friday after 22 consecutive days of decline. Two other bonds due in 2023 and 2028 have seen their dollar values fall by almost one-third this month.

Investors are concerned about the company’s ability to meet its bond obligations in the second half, which amount to 5 billion yuan.

Despite first-half revenue rising 4.78%, the company suffered a loss of 3.38 billion yuan, widening from a 3.2 billion yuan loss in the same period last year. However, the company’s debt-to-asset ratio fell about five points from the start of the year to 68.41%, and as Caixin understands, the company expects the ratio to fall below 60% by the end of this year.

Adding to market concerns over the company’s finances are Unigroup’s plans to sell its 11.14% stake in Shenzhen-listed subsidiary Tsinghua Unisplendour. Two state-owed asset management firms have paid deposits for the shares, but the deal has yet to be completed, Unigroup said.

Also adding to market uncertainty are rumors that one of its creditors is planning to set up a creditor committee in preparation for potential bankruptcy proceedings. A source at the chipmaker denied this rumor.

As part of China’s plan to build a world-class semiconductor industry, Tsinghua Unigroup has received billions in funds from government-backed investors. The company is controlled by Tsinghua Holdings — the business arm of Beijing’s prestigious Tsinghua University.

Caixin reported earlier this month that another state-owned, university linked company— Peking University Founder Group Corp (PUFG) — will not recognize $1.7 billion of dollar bonds issued by two overseas subsidiaries as its own debt.

PUFG — which is undergoing bankruptcy reorganization — is already the largest defaulter of U.S. dollar bonds that China has seen in nearly two decades, analysts at S&P Global Rating Inc. said.

Many sources at private equity firms told Caixin that PUFG’s decision not to recognize the units’ keepwell deed-backed debt as its own has raised concerns over similar bonds issued by Unigroup’s subsidiaries.

Instead of a guarantee for the bonds, PUFG and Tsinghua both offered keepwell deeds as “letters of support” to facilitate their subsidiaries’ bond sales.

A previous version of this story confused U.S. dollars and yuan in several instances.