By Wang Jing and Luo Meihan 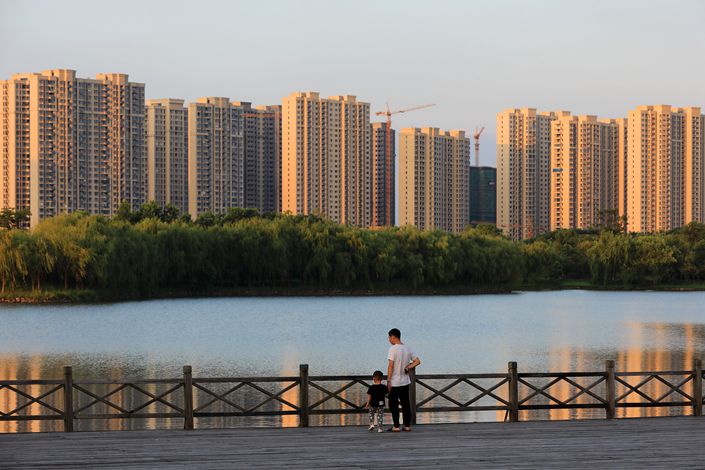 A residential complex under contruction towers over a lake in Huaian, East China’s Jiangsu Province, on Aug. 30.

Following the latest government effort to limit the amount of money flowing into property developers’ hands and to curb financial sector risk, an unusual situation has emerged — land sales are slowing even as property sales are accelerating.

Since April, new home sales have been better than expected, largely driven by the release of pent-up demand as the housing market started to recover from the domestic Covid-19 epidemic.

In August, sales by China’s 100 leading developers rose over 30% year-on-year to 976.2 billion yuan ($142.8 billion), accelerating from a 25.7% rate the previous month and marking the fifth straight month of growth, according to (link in Chinese) property consultancy China Real Estate Information Corp. (CRIC). At the end of August, nearly 70% of the developers saw their year-to-date sales grow year-on-year, said CRIC.

The amount of money spent on land transactions declined, however.

Among 50 major Chinese developers, 31 spent less money acquiring new land in August than their monthly averages over the previous seven months, according to a report (link in Chinese) by property research firm China Index Academy Ltd.

In 60 cities monitored by real estate services firm Leju Holdings Ltd. (link in Chinese), developers’ land purchases were worth 61.6 billion yuan in the last week of August, down nearly 30% from the previous week. “The regulatory tightening on developers’ financing is likely the main reason behind the decline,” the agency said.

On Aug. 20, regulators said they would pilot new rules that would limit real estate firms’ ability to take on more borrowing, according to sources who took part in an internal meeting.

“This is a clear signal from the regulators, which could lead some real estate firms to slow down the pace of land purchases,” one source at a major property developer said, adding that reducing land purchases is one of the most effective ways to curb developers’ debt.

Previously, the more land reserves a real estate developer had in hand, the more financial resources it had access to, which in turn allowed it to acquire more land reserves and fueled rapid expansion. “As a big company, you are treated as one of the most important customers by banks, and offered the lowest financing costs,” said Wu Jianbin, an executive vice president of developer Yango Group Co. Ltd.

In the future, most developers will purchase land based on their operating cash flow, instead of how much money they borrow, as financial institutions are pushed to provide financing based on a developer’s stability, rather than its size, said the anonymous senior executive.

Home sales are expected to grow in the second half of this year, which will lead to more land purchases, but “developers will not be too aggressive,” the report said.

Timmy Shen and Gavin Cross contributed to this report.