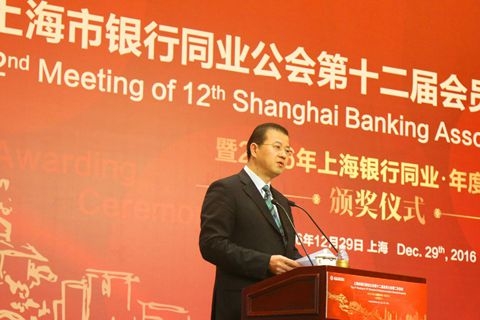 A senior bank regulatory official in Shanghai was placed under investigation for graft, sending another shock wave through the industry in China’s financial hub.

Zhou Wenjie, a member of the Communist Party committee and deputy director of the Shanghai Bureau of the China Banking and Insurance Regulatory Commission (CBIRC), is being probed for “serious violation of discipline and law,” the party’s anti-corruption watchdog said Monday in a statement.

The Shanghai banking sector has been rocked by graft scandals under Zhou’s oversight. At least five top bankers have also come under investigation. Three of the cases are intertwined and are most likely linked to an investigation of former securities chief Liu Shiyu, sources close to the matter told Caixin.

Zhou, 49, joined the Shanghai office of the national banking regulatory body in 2003 and was promoted to deputy bureau chief in 2016. Before that, he worked for the central bank’s Shanghai branch since 2001.

Investigators targeted Zhou during an ongoing investigation of Gu Qingliang, former head of the Shanghai branch of China Zheshang Bank, people familiar with the matter told Caixin. But Zhou is also being probed for other violations, they said.

Gu Qingliang, who resigned from Zheshang Bank in late 2018, was investigated in mid-2019 for suspected violations involving the bank’s fast-expanding interbank business, Caixin learned. In July, the CBIRC fined Zheshang Bank more than 100 million yuan ($14.6 million), the highest penalty issued against a commercial bank since early 2018, over its involvement in illegal interbank business.

Zheshang Bank expanded its assets by 130% from 2014 to 2017 by borrowing enormous sums on the interbank market and then investing in higher-yielding assets, Caixin reported previously. It came under scrutiny after the regulator instructed financial institutions to cut back on interbank business and reduce off-balance sheet assets.

In June 2019, Gu Guoming, a former head of the Shanghai branch of Industrial and Commercial Bank of China Ltd. (ICBC), was placed under investigation. Gu Guoming is accused of taking nearly 137 million yuan ($19.5 million) in bribes between 2008 and 2019, a Shanghai court said in July following a hearing.

Leng Peidong, the chief of the Shanghai branch of Ping An Bank, was investigated in October 2019, Caixin reported earlier. Leng’s predecessor, Yang Hua, is also under probe.