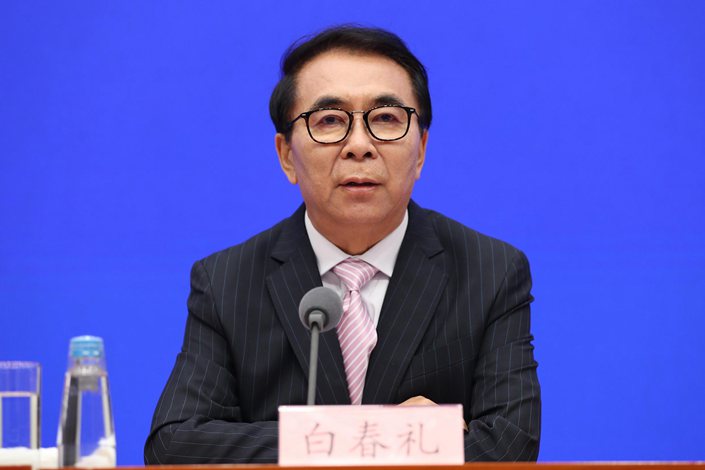 Bai Chunli, president of the Chinese Academy of Sciences.

China’s national science academy pledged Wednesday to concentrate on plugging the country’s gaps in certain advanced technologies over the next ten years, especially for those key materials that rely on imports from the United States, in an effort to counter Washington’s tech decoupling with Beijing.

Bai Chunli, president of the Chinese Academy of Sciences (CAS), said during a press conference hosted by the State Council, China’s cabinet, that the academy is determined to deploy “targeted, issue- and result-oriented” research and development (R&D) on technologies in “key areas of national interest” from 2020 to 2030.

Bai, also a physical chemist, said the plan covers China’s supercomputer system, which has already been applied to weather and atmosphere forecasting in the country, pharmaceutical R&D and molecular design. He said it could also be used in fundamental research and space science.

In particular, the academy will use all the resources at its disposal to concentrate on plugging gaps in those technologies, which include aircraft tires, bearing steel and lithography machines, among other key technologies and materials.

He also said the academy has established a number of task forces with those assigned to take a “warrior’s oath” in tackling some core technologies.

The president’s pledge is part of the academy’s 16-year “First to Act” plan (“率先行动”计划), which kicked off in 2014 and aims to transform China into a top innovative country by 2035. According to the academy’s annual budget in 2019, it received total government funding of more than 53 billion yuan ($7.8 billion).

On Friday, President Xi Jinping said at a symposium with Chinese scientists that “certain key and core technologies have been controlled by others and China relies on imports for some key components, parts and materials.”

Xi said the country must improve its innovation capabilities and achieve breakthroughs in key and core technologies as soon as possible.

Regarding China as a “strategic competitor,” U.S. President Donald Trump’s administration has been tightening restrictions on exports of advanced technologies and the supply chain of core components for Chinese companies, such as by banning U.S. firms from supplying chipsets to telecom giant Huawei Communications Co. Ltd.

The Trump administration has also imposed visa restrictions on Chinese students — particularly researchers with a military background — that prevent them from studying advanced science and technology in the U.S. over concerns for alleged intellectual property theft.

This year, U.S. law enforcement, including the FBI and the Justice Department, arrested and indicted Chinese scholars linked to the People’s Liberation Army, and also top American scientists allegedly working with the Chinese government ― accusations that Beijing has denied.