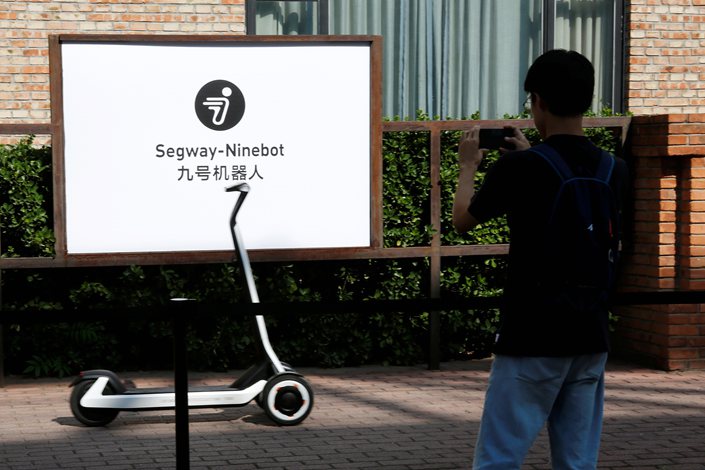 Electric-scooter maker Ninebot Ltd. has had its application for an IPO on Shanghai’s Nasdaq-style high tech board passed by the securities regulator, a move that paves the way for Chinese mainland stock markets to pass two significant milestones.

Ninebot, which owns the Segway scooter brand, will become the first foreign-registered Chinese company with a variable-interest entity (VIE) structure to go public, and the first to sell Chinese depositary receipts (CDRs), a new type of equity security created in 2018 to allow overseas firms to list on a mainland bourse.

The China Securities Regulatory Commission (CSRC) gave the final blessing to the IPO on Tuesday. In a statement (link in Chinese) on Tuesday, the commission said it agreed to Ninebot’s application which will be valid for 12 months. The company must sell its CDRs strictly in accordance with the approved prospectus and other IPO documents, it said.

Ninebot is backed by Chinese electronics giant Xiaomi Corp.; venture capital firm Sequoia Capital China GF Holdco III-A, Ltd., a unit of venture capital firm Sequoia Capital China; and Intel Capital Corp., part of U.S. tech giant Intel Corp. Xiaomi, which holds a 10.91% stake in Ninebot, is also one of Ninebot’s key clients. Related-party sales to Xiaomi accounted for more than half the company’s revenue in 2019, according to its prospectus.

Ninebot, the parent of American personal-transporter manufacturer Segway, applied for its IPO in April 2019. The application was first passed by the listing committee of the Shanghai bourse’s STAR Market in June this year before moving on for the final green light from the CSRC. The company plans to raise more than 2 billion yuan ($295 million) through the issuance of as many as 7.04 million A-shares to its custodian bank, Industrial and Commercial Bank of China Ltd., which will then sell the company’s CDRs to domestic investors at a ratio of 10 CDRs to one ordinary share, according to the latest version of the prospectus (link in Chinese) released to the Shanghai bourse in July.

Ninebot’s main markets are the U.S. and Europe as many regions across China restrict the use of electric scooters on the road. Even so, domestic demand has been steadily increasing over the past few years, the prospectus shows.