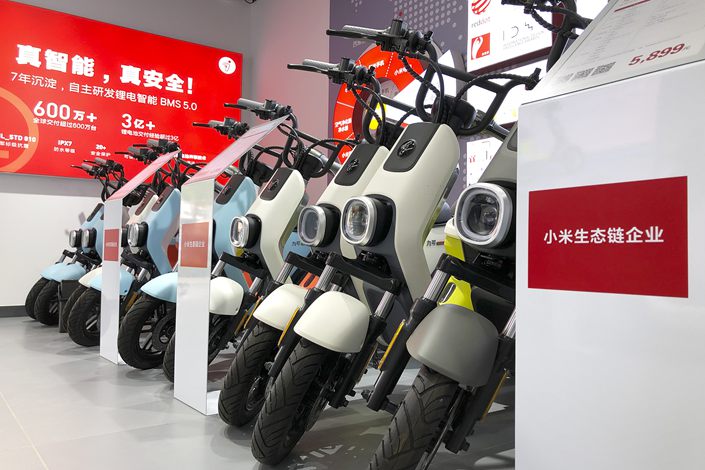 A Ninebot electric bike store in Beijing on July 4.

More than two years after China’s stocks regulator unveiled a Chinese depositary receipts (CDRs) program to lure overseas-registered domestic companies to list at home, the first IPO is set to launch with massive demand for the securities.

Although tech giants including Alibaba Group Holding Ltd., Baidu Inc., and Xiaomi Corp. were touted as top candidates for the initiative, their talks with regulators floundered and the company now about to make history is little-known electric-scooter maker Ninebot Ltd. CDRs are a new type of equity security created in 2018 that allow foreign-registered Chinese firms with what’s known as a variable-interest entity (VIE) structure to list on a mainland bourse.

Investor appetite for the 12 million CDRs originally on offer in the online portion of the share sale was overwhelming. Beijing-based Ninebot received 4.5 million applications for 45.1 billion CDRs, according to a Tuesday company filing (link in Chinese) with the Shanghai Stock Exchange. The company boosted the number of CDRs available to 18 million by taking receipts from the allocation for the offline offering which was reduced to 42.5 million CDRs. Another 9.9 million CDRs were allocated to strategic investors.

The receipts were priced at 18.94 yuan ($2.8) each and were only available to investors who hold at least 10,000 yuan of shares traded on the Chinese mainland in their portfolios.

The company’s application to issue CDRs on the STAR Market, Shanghai’s Nasdaq-style high tech board, was accepted in June and it obtained the final green light from the securities regulator in September. It sold 7.04 million A-shares to its custodian bank, Industrial and Commercial Bank of China Ltd., which then packaged them into CDRs at a ratio of 10 CDRs to one ordinary share and sold them to domestic investors, the filing said. The offering represents 10% of the company’s enlarged share capital.

The company is backed by Chinese electronics giant Xiaomi; venture capital firm Sequoia Capital China GF Holdco III-A, Ltd., a unit of venture capital firm Sequoia Capital China; and Intel Capital Corp., part of U.S. tech giant Intel Corp. Xiaomi, which holds a 10.91% stake in Ninebot, is also one of Ninebot’s key clients. Related-party sales to Xiaomi accounted for more than half the company’s revenue in 2019, according to its prospectus.