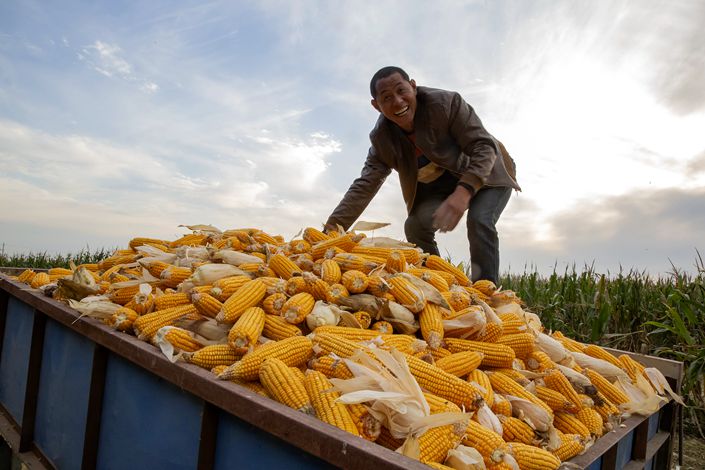 An agriculture ministry official has reassured the public about the recent surge in corn prices in China, pinning the increase partly on speculators betting on short-term shortages despite expectations of a good harvest this year.

The official’s statement on Wednesday indicates the ministry’s interest in getting ahead of any talk of a shortage in the grain, a key component of hog feed, in China, the world’s second-largest corn consumer. It comes at a time when some domestic corn prices have risen to levels not seen since the mid-2000s and as the government is making a bigger issue of food security.

Domestic corn prices have been on the rise. The most-actively traded corn futures contract, for delivery in January, on the country’s Dalian Commodity Exchange rose to as high as 2,629 yuan ($395) per ton on Monday, the highest since the contract began trading in 2004. That’s up markedly from the average wholesale price for domestic corn for the 2019-2020 marketing year, which ended Sept. 30. That price was 1,965 yuan per ton, up 5.2% (link in Chinese) from the previous marketing year, according to the Ministry of Agriculture and Rural Affairs.

The price growth is “fairly reasonable,” especially if you consider the crop damage from typhoons this year, which have pushed up harvest costs, Wei Baigang, head of the agriculture ministry’s Department of Development and Planning, said at a Wednesday press conference (link in Chinese).

However, damage from the typhoons was limited and “corn production remained steady and growing,” the agriculture ministry said.

The issue is further complicated by the fact that China’s immense state corn stockpile is running low this year, leaving a wider gap between supply and demand. The situation has made grain traders bullish about corn. Prices have risen as traders have bought more of the grain, hoping to store it and sell it later at higher prices, multiple industry insiders told Caixin.

One farmer in Northeast China’s Heilongjiang province estimated that the amount of just-harvested corn and state reserves now held by local grain merchants could amount to millions of tons.

Given the small amount of corn currently in circulation, it has been highly sought-after by grain traders and corn processors, said Ma Wenfeng, a senior analyst at agricultural consultancy Beijing Orient Agribusiness Consultant Ltd.

The increase in domestic corn prices comes in the context of rising global prices. The Food and Agriculture Organization’s (FAO) Cereal Price Index, which tracks international prices of commonly traded grains, hit its highest since 2014 in September, up 13.6% year-on-year. Corn prices were up on projections of lower production, including an expected drop in U.S. corn production for 2020.

While predicting that global cereals will remain well supplied in 2020, the FAO in October lowered its forecast for full-year global production by about 0.1% from its September forecast to 2.76 billion tons. The adjustment is chiefly meant to reflect less global corn output than expected, due to bad weather conditions in major production regions, including China, the U.S., the EU, Russia and Ukraine, the FAO said.

However, a good domestic corn harvest is expected this year, ministry official Wei said. The additional corn on the market will help keep prices in check.