By An Limin, Wang Juanjuan and Timmy Shen 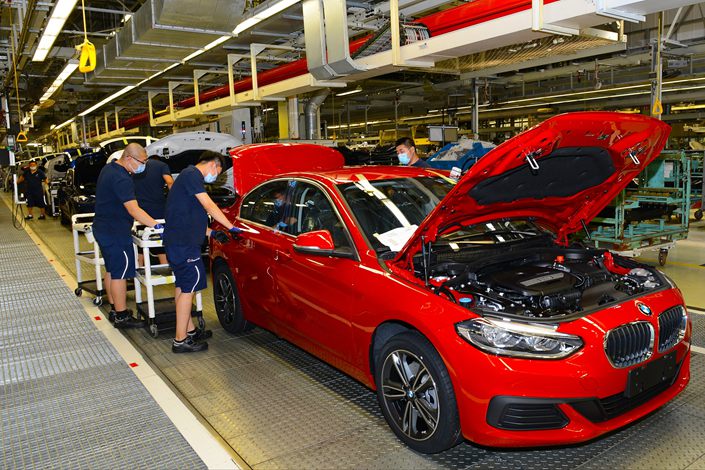 Brilliance Auto had wanted its creditors to give it an extra 90 days to make the payments, according to a source from a private fund manager that held the bond.

The default is the culmination of months of financial strain that began to show at the state-owned automaker in August, when a sell-off in the company’s bonds revealed that investors were concerned about its ability to scrape together the cash to pay its bills and pay off its debts.

Brilliance Auto, which is owned by the government of Northeast China’s Liaoning province, acknowledged that it was having trouble getting its hands on enough cash to pay the 1 billion yuan in principal and 53 million yuan in interest due when the bond matured Friday. “It remains uncertain whether the company will be able to find enough money in time,” the company said in an announcement (link in Chinese) dated Friday on the Shanghai Stock Exchange’s website.

The company was supposed to transfer the 1.053 billion yuan plus operational fees on Wednesday to the Shanghai branch of China Securities Depository and Clearing Corp. Ltd., a state-owned financial institution that provides securities registration and settlement services, but failed to do so, the announcement said.

Brilliance Auto had wanted its creditors to give it an extra 90 days to make the payments, according to a source from a private fund manager that held the bond.

The fund manager had visited the Liaoning financial authorities just a week before the bond matured, and government officials said that they had a meeting with local financial institutions and even released a document, seen by Caixin, saying that it would coordinate with local banks to make sure the bond was repaid, the source told Caixin on Friday.

Brilliance’s 2020 interim report (link in Chinese) showed that it had about 132.8 billion yuan in total liabilities at the end of June.

Brilliance Auto is perhaps best known for its collaboration with BMW. In 2003, Brilliance China Automotive Holdings Ltd., a Brilliance Auto subsidiary, established a joint venture with the German luxury automaker to make passenger cars with the BMW brand at two plants in Shenyang, capital of Brilliance’s home province.

The venture, BMW Brilliance Automotive Ltd., has been a success. It has held about a quarter of China’s luxury passenger car market over the last three years. In 2019, the joint venture contributed over 90% of Brilliance’s revenue and net profits, according to the companies’ financial data. But in October 2018, the partners agreed that BMW would increase its stake in the venture from 50% to 75% in 2022, the year when China’s current foreign ownership limits for the industry will expire.