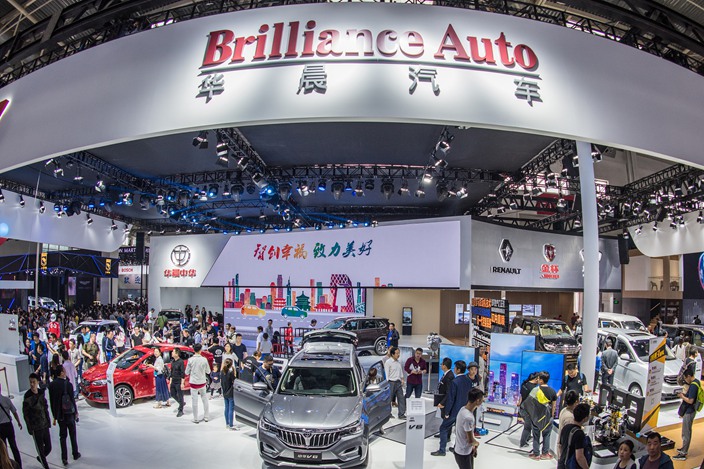 Over the next three years, about 11.5 billion yuan of bonds issued by Brilliance will come due, according to Caixin’s calculations.

A sell-off in bonds issued by Brilliance Auto Group Holdings Co. Ltd. has revealed investor concern over the state-owned carmaker’s growing financial strain, after it agreed to sell down its stake in a lucrative joint venture to its partner BMW AG.

Several of Brilliance’s bonds slumped on Aug. 12 after some bondholders sold off the debt. Prices of two bonds traded on the Shanghai Stock Exchange plummeted more than 20% during the day, which led to trading halts.

On Friday, the price of one of the company’s bonds fell to 26 yuan ($3.7), 69% lower than the estimated price the previous day reported by bond clearing house China Central Depository and Clearing Co. Ltd. That put its price lower than some junk bonds issued by companies which have previously defaulted — which Brilliance has never done.

The sell-off was totally unexpected, said a Brilliance executive. It now has 17.5 billion yuan ($2.5 billion) in outstanding bonds, according to Caixin’s calculations.

The main cause of the sell-off is a 70 million yuan legal dispute between Brilliance and one of its bond underwriters, Tianfeng Securities Co. Ltd., the executive told Caixin.

Early this year, Tianfeng underwrote a Brilliance bond issuance, and Brilliance promised to pay it money on top of the underwriting fees, sources with knowledge of the matter told Caixin. However, Brilliance didn’t fork over the extra cash.

Tianfeng later sued over the matter. On July 22, Shanghai-listed Shenyang Jinbei Automotive Co. Ltd., a Brilliance subsidiary, said in a filing (link in Chinese) that Brilliance’s 10.8% stake in the company had been frozen on Tianfeng’s request. Brilliance is negotiating with Tianfeng on a solution to the issue, the executive said.

Also, market rumors have spread that Brilliance has run into operational problems. The executive said the rumors involved Brilliance requiring some workers to take leave on a rotating basis. She said the regular mandatory leave was to prevent factory workers from working in hot weather.

Although the prices of some Brilliance bonds have recovered since last week’s sell-off, the company still faces an uncertain future.

In 2003, another Brilliance subsidiary founded a joint venture with BMW to produce passenger cars with the German company’s branding at two plants in Shenyang, capital city of Brilliance’s home province of Liaoning.

The venture, BMW Brilliance Automotive Ltd., has been a success. It occupied about a quarter share of China’s luxury passenger car market over the last three years. Last year, the joint venture contributed over 90% of Brilliance’s revenue and net profits, according to the companies’ financial data.

But in October 2018, the partners agreed that BMW would raise its stake in the venture from 50% to 75% in 2022, the year China’s current foreign ownership limits in the sector will expire.

Brilliance’s 50% stake in the venture was a big reason why investors bought its bonds, said a bond market analyst. With the halving of Brilliance’s stake, investors are worried the venture might struggle to pay back its debt after 2022, especially given the poor sales of its own-branded cars, the analyst said.

Over the next three years, about 11.5 billion yuan of bonds issued by Brilliance will come due, according to Caixin’s calculations.

Last year, Brilliance produced 178,200 passenger cars with its own branding, down 19.7% from the year before, according to a note (link in Chinese) published by Golden Credit Rating International Co. Ltd. By comparison, the venture produced 535,700 passenger cars in 2019, up 9.1% year-on-year.

Will the government step in?

The Brilliance executive said the impact of the 2022 stake sale won’t be as severe as the market worries.

Brilliance attached strings to the deal. For example, the partnership will be extended to 2040, from the original 2028 expiration. BMW also pledged a 3 billion euro ($3.5 billion) investment in Shenyang and will establish a third plant in the city, making it the carmaker’s biggest production base worldwide.

The investments would raise the venture’s sales and help boost Brilliance’s earnings, the executive said. Also, some business units of Brilliance will begin to supply components for BMW cars.

In addition, Brilliance told investors that Liaoning’s provincial state-owned asset watchdog has set up a special group to deal with its potential debt problems.

However, these reassurances have proved less than reassuring. Investors will wait to see when the government will actually intervene, said one bondholder. Chinese corporate bond defaults have continued to rise this year as governments have shown increased tolerance for defaults amid the pandemic.