By Liu Yukun and Anniek Bao 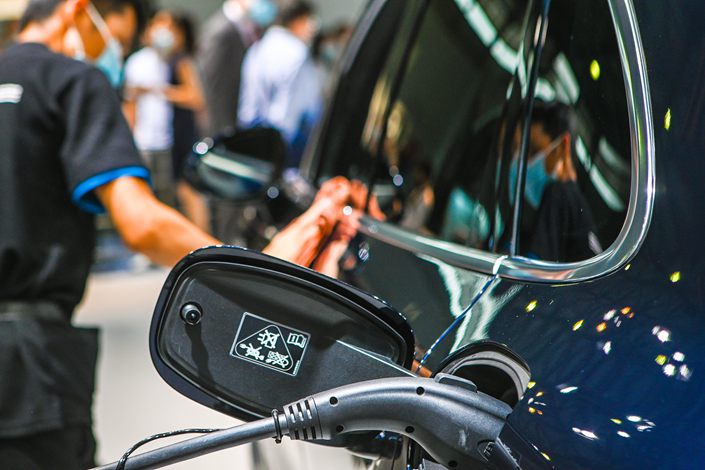 SAE-China’s bold prediction follows a contraction of the market last year, with 1.26 million NEVs sold in 2019 compared to 1.3 million the year before according to data from the China Association of Automobile Manufacturers. China’s NEV sales in the first five months of 2020 tumbled 39.7% year-on-year, due in part to the impact of the pandemic.

That decline came despite years of official efforts to promote the more environmentally friendly vehicles, which has led to China becoming the world’s largest market for the cars.

But the blueprint’s authors remain confident the sector will bounce back, seeing annual sales growth of 20% by 2025 and 40% by 2030.

Demand for completely electric cars will be particularly strong, the report estimates, with battery-only cars making up 95% of NEV sales by 2035. “It is a bold estimation,” SAE-China Chairman Li Jun said.

Chinese policymakers have piloted local programs banning gasoline-powered vehicles, but never announced a countrywide ban. Instead, the country has opted for generous financial subsidies to stimulate NEV sales, hoping to both clean up the country’s chronic air pollution and get an edge on the transport tech of the future.

A group of experts recently advised against setting a timeline for purging the roads of traditional vehicles, arguing that a diversified fleet of vehicles will better serve the country’s complex environmental and traffic conditions.

According to a report from an energy and transportation think tank released this summer, gasoline or diesel burning cars will no longer be on the market in China by 2045 and domestic carmakers will totally halt the production of such cars by 2050.

Chinese President Xi Jinping announced the nation’s plan to reach carbon neutrality by 2060 last month at a virtual meeting with the UN General Assembly, and he expects the country’s CO2 emissions to peak before 2030. China is now the world’s biggest emitter of the greenhouse gas, producing some 28% of global emissions.