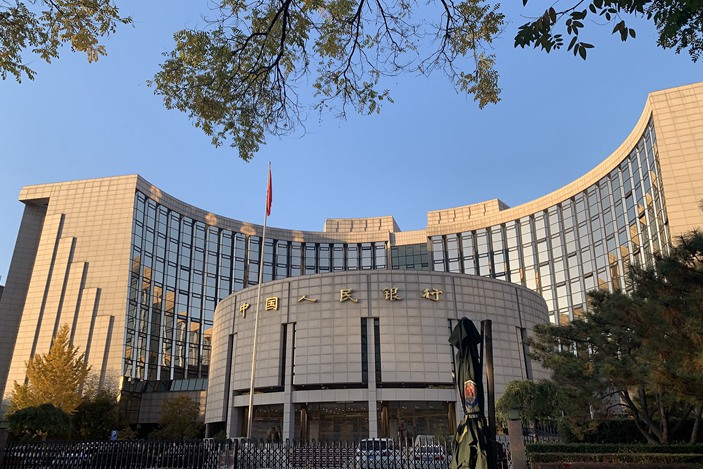 The People's Bank of China headquarters in Beijing.

China’s central bank pumped liquidity into the money market that oils the daily wheels of the country’s financial system this week, helping to relieve some of the anxiety that’s gripped institutions and investors after a series of bond defaults by state-owned enterprises.

The People’s Bank of China (PBOC), which used its medium-term lending facility (MLF) as the vehicle for the cash injection, added 800 billion yuan ($121.5 billion) of one-year funds into the interbank market on Monday in its once-a-month operation. That left a net injection of 200 billion yuan after 600 billion yuan was used to roll over MLF loans that matured on Nov. 5 and on Sunday, central bank data show. The facility is a key component of the central bank’s policy toolkit that provides funding to banks, manages liquidity and helps determine interest rates.

The central bank has now added liquidity through the MLF for the fourth straight month, bringing the total since August to 1.05 trillion yuan. Although November’s increase was lower than the amounts added in both October and September, and the interest rate on the facility was unchanged at 2.95%, analysts saw the move as helping to dial back growing stress in the financial markets stemming from the defaults.

November’s MLF injection and the central bank’s open-market operations in the second half of last week, which also added liquidity, signal the PBOC’s intention to “reassure and calm” the markets, Ming Ming, deputy director of research at Citic Securities Co. Ltd., said.

Starting from Wednesday last week, the PBOC stepped up (link in Chinese) cash injections through the use of daily reverse repurchase agreements, its main tool for managing short-term liquidity, in response to tightened monetary conditions stemming from the Double 11 shopping extravaganza and the default on a 1 billion yuan ultra-short-term bond by Yongcheng Coal and Electricity Holding Group Co. Ltd.

Yongcheng’s failure to repay its bond and interest set off a chain reaction that spread to other coal mining companies and local government financing vehicles in other provinces. Miners in Shanxi and Hebei provinces were forced to either cancel their bond issuance plans or slash their fundraising targets as investor demand dried up. Coal bonds traded on the interbank market and stock exchanges plunged.

Although risks from the bond defaults aren’t yet significant enough to affect the money markets, growing fear that other companies will be unable to repay their debts may bolster demand for “preventive liquidity” and that could disrupt markets further, said Hua Changchun, an economist at Guotai Junan Securities Co. Ltd. Investors are likely to increase demand for cash which means they will sell their most liquid assets, such as government bonds, and that will have a knock-on effect on market interest rates, Hua said.

Bond prices have already fallen sharply as a result of the defaults, which has pushed up yields and the interest rate companies and local governments have to pay on the new bonds they sell. That in turn may lead to an increase in market interest rates which are increasingly being set by the market through the loan prime rate and guided by the interest rate on the one-year MLF.

So far, the PBOC has stayed pat on the MLF interest rate and Hua said that judging from the current situation, the rate is likely to remain stable before the economy returns to its normal trajectory.

Investors have also been unnerved by comments from central bankers and policymakers about the need to wind down the loose monetary policy stance adopted to fight the economic slowdown and cushion the impact of the Covid-19 pandemic. China’s central bank has been indicating a normalization of monetary policy as the economy gradually recovers from the pandemic.

Liu Guoqiang, vice governor of the People’s Bank of China (PBOC), said at a Nov. 6 briefing that an exit will be necessary at some point, although he gave no details of timing. Sun Guofeng, head of the PBOC’s monetary policy department, told the same briefing that monetary policy will be adjusted (link in Chinese) in accordance with the changing environment and market demand.

Lou Jiwei, a former finance minister, weighed into the debate on Friday at the Caixin Summit in Beijing, saying that that it was about time for China to start looking at how to achieve an orderly exit from its loose monetary policy, but stressed that he didn’t think the country should make any immediate change.