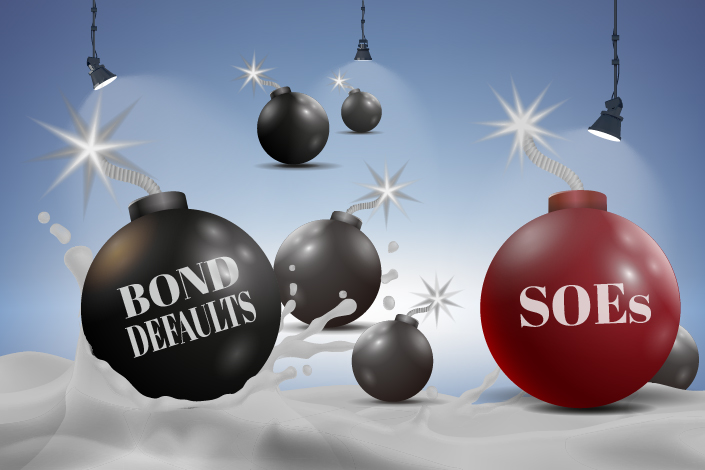 The extension proposal put forward by Everbright Bank requires the approval of all bondholders, but so far there is no unanimity, sources close to the matter told Caixin.

Troubled state-owned coal miner Yongcheng Coal and Electricity Holding Group Co. Ltd. is racing to get investors’ agreement to extend the term of a 1 billion-yuan ($152.5 million) bond it can’t repay to avoid triggering defaults on a further 26.5 billion yuan of debt owed by the company and its parent.

China Everbright Bank Co. Ltd., the lead underwriter of the ultra-short-term bond issued by Yongcheng Coal in February, has asked bondholders to accept a 270-day extension for repayment of the principal which was due on Nov. 10, sources close to the matter told Caixin. The Henan province-based company paid all of the 32.4 million yuan in overdue interest on the bond on Friday.

If no agreement is reached by Nov. 24, cross-default clauses specified in the bond’s prospectus will be triggered which means a further 15 billion yuan of Yongcheng Coal bonds and 11.5 billion yuan of debt issued by its parent Henan Energy and Chemical Industry Group Co. Ltd. will go into technical default.

The scramble comes as it looks increasingly unlikely that neither Henan Energy nor its ultimate owner, the State-owned Assets Supervision and Administration Commission (SASAC) of Henan province, will come to the rescue of the money-losing miner, marking a sea-change in the traditional local government approach to dealing with debt-ridden companies.

The lack of government support and an apparent unwillingness to organize a bailout for the state-owned enterprise (SOE) is changing investors’ appetite for corporate bonds and eroding confidence in the debt issued by weaker SOEs, according to analysts and investors interviewed by Caixin.

Yongcheng Coal’s missed payment “surprised the market because it indicated the local government's attitude to provide support had reversed within just one month,” Chang Li, China country specialist at S&P Global Ratings, said in a report on Tuesday, referring to the sale of a medium-term note by the company just one month before the default.

“The pandemic and increasingly stringent regulations from central authorities could restrain local governments’ power to coordinate financial resources, and even the willingness to provide support,” S&P said in its report. “We believe the government willingness to support will remain stronger for more public policy-focused SOEs.”

Yongcheng Coal is seeking a delay of 270 days on all six of its ultra-short term bonds, which includes the one in default, and an extension of 18 months on the repayment of eight three-year medium-term notes. On Tuesday, the miner issued statements saying there was “uncertainty” surrounding its ability to repay the principal and interest on two bonds totalling 2 billion yuan due on Nov. 22 and 23, respectively, citing “tight cash flow.”

The extension proposal put forward by Everbright Bank requires the approval of all bondholders, but so far there is no unanimity, sources close to the matter told Caixin. Some investors said they intend to agree on the condition that no further assets are transferred out of the company within the 270 days and that its cash flow is closely monitored. But others told Caixin they will reject the plan and demand immediate repayment.

Parent Henan Energy, which is owned by the provincial SASAC office, is not in a position to offer financial help to Yongcheng Coal – it had debts of 168 billion yuan at the end of March, according to an October report from China Chengxin International Credit Rating Co. Ltd., and its annual reports show it lost 2.1 billion yuan in 2019 and 882 million yuan in 2018.

Provincial officials have agreed there is little point in putting together a bailout because they think Henan Energy is a “hopeless” case, sources close to the matter who declined to be named told Caixin. With no permanent solution to the company’s debt problems likely anytime soon, the current priority for the government is to safeguard coal production and employees’ livelihoods, they said.

Local governments, who are facing their own financial pressures, have become far less willing to bail out SOEs, preferring to focus on keep local government financing vehicles (LGFV) afloat, a source in the bond compliance department of a brokerage firm told Caixin.

“Apart from taxation and revenue from land sales, income from LGFVs is now a key source of funding for local governments, so their willingness to bail out these entities is strong,” the source said. Industrial SOEs, especially highly indebted ones, don’t contribute to the coffers of local governments through taxes and dividends, and officials see little opportunity for them to develop and flourish, so there is less appetite for rescue.

Even if the willingness is there, many local governments are finding it hard to make ends meet this year due to the fallout from the Covid-19 pandemic and slowing economic growth. The shortage of money means there’s little in the cupboard left for bailouts and rescues –– the number of defaults of local SOEs is highly correlated with the fiscal balance of local governments, analysts at Shenwan Hongyuan Securities Co. Ltd. wrote in a Monday note.

Liang Hong contributed to this report.