By Matthew Walsh and Sun Liangzi 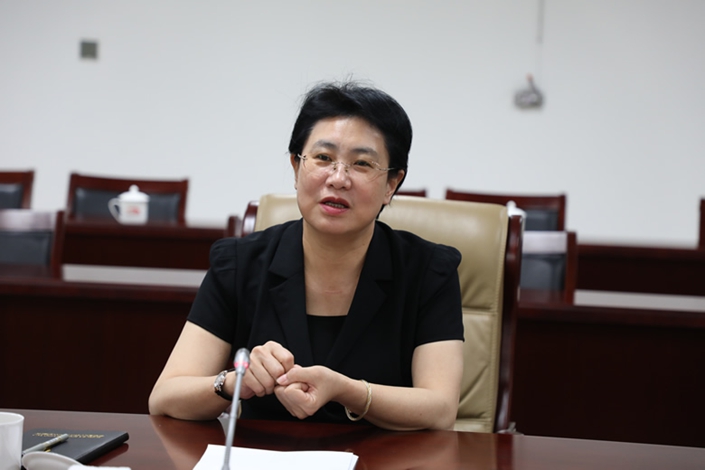 The Chinese Communist Party has expelled one of its top female officials and handed her over to public prosecutors, accusing her of partaking in corruption and “superstitious activities.”

The downfall of Ren Hua, the former vice chairwoman of Northwest China’s Xinjiang Uygur autonomous region, marks the first time a female “tiger,” or high-ranking official, has been ousted on corruption charges since the last Communist Party national congress in 2017.

The Central Committee for Discipline Inspection, the party’s internal graft-buster, said in a statement Monday that Ren “lost her ideals” and “showed disloyalty to the party” by “engaging heavily” in superstition and accepted lavish banquets, gifts and makeovers.

She becomes the latest major party official to become entangled in President Xi Jinping’s flagship anticorruption campaign since it began in 2012. China’s leader has exhorted inspectors to target both powerful “tigers” and more low-ranking “flies.”

The statement (link in Chinese) includes a lengthy list of Ren’s violations of party protocol and alleged legal breaches, saying that she has been relieved of her government duties and party membership and passed on to public prosecutors.

Notably, it gives prominence to her participation in “superstitious activities,” a term that includes a wide range of religious, quasi-religious and folk beliefs. China’s ruling party requires its members to be atheists.

The statement does not give details of Ren’s supposed beliefs. In the past, the party has punished officials for belonging to outlawed organizations, creating or promoting suspicious doctrines, visiting fortunetellers and engaging in other activities deemed “feudal.”

However, the authority did elaborate on some of Ren’s other offenses, including enjoying “banquets, high-end makeovers, and other forms of extravagant consumption that could have impacted the fair discharge of her public duties,” as well as illicitly frequenting private clubs and accepting monetary payments and other gifts.

Additionally, she raked in vast sums via illegal lending, profited privately from public project tenders and land transfers, illicitly participated in “alumni societies” and “used her public powers as a tool for personal gain,” the statement said.

According to a resume included in Monday’s statement, Ren became vice-chairwoman of the Xinjiang government in 2018 and concurrently served as deputy director of the publicity department in the regional party committee. A rare female figure in China’s male-dominated political arena, she received steady promotions after starting her career in government in 1986.

It previously emerged in June that Ren was under investigation for suspected disciplinary violations. Her last significant media appearance occurred on May 31, when a Xinjiang broadcaster ran a news report about an educational initiative in which she had taken part.

The 56-year-old joins a growing who’s who of cadres who have “fallen off the horse,” as the Chinese euphemism goes, amid corruption allegations this year. Recent additions include a former senior executive of China’s national liquor maker, an erstwhile top executive at a state-owned oil giant, and a securities regulator-turned-provincial party chief.

According to a report published last week by Transparency International, a Berlin-based nonprofit that tracks corruption, 64% of people in China said they thought corruption had fallen in the past year, while 84% said they approved of the government’s anticorruption efforts.

The figures were based on telephone surveys of 2,000 people in June and July this year, a small but significant sample size in a country where such studies can be hard to carry out.