By Matthew Walsh and Huang Rong 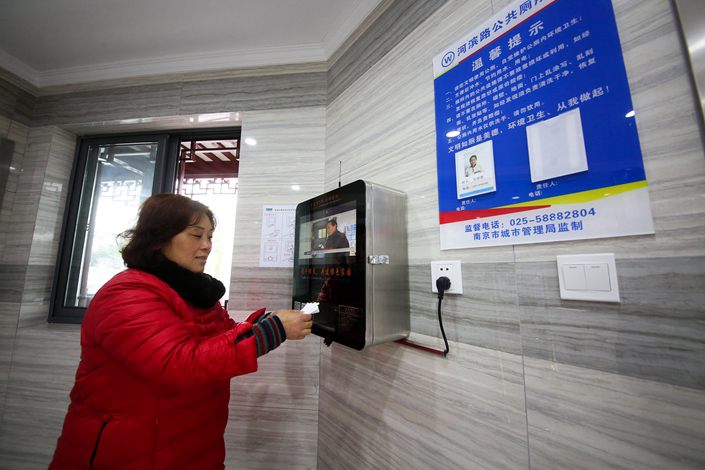 A public restroom in South China that installed a toilet paper dispenser equipped with facial recognition technology has removed the device after a public backlash.

The high-tech lavatory in the city of Dongguan used a machine that scanned and analyzed people’s faces before providing them with a prescribed amount of paper.

Authorities claimed that the technology reduced waste, but many users said it was an invasion of privacy.

The city management authority said Sunday the restroom had stopped using the device and gone back to providing unlimited free toilet paper.

Companies and local authorities have often framed the facilities as part of China’s so-called “toilet revolution,” a government-backed campaign to rid the country of unsanitary public latrines.

But many people have said they struggle to stomach the intrusion of cutting-edge technologies into their private lives.

On Weibo, China’s biggest social media website, a page (link in Chinese) devoted to facial recognition-equipped toilet paper dispensers had been viewed some 110 million times by Tuesday morning. Users commonly questioned whether the technology was needed in public lavatories and whether it was secure.

The discussion reflects deeper concerns in Chinese society about the unfettered spread of facial recognition in public areas and the risk of personal data leaks.

Lawmakers are considering new rules for collecting and using facial data, and some cities intend to curb its deployment in certain areas.

The Dongguan toilet’s dispenser was made by Tianjin SoLine Technologies Co. Ltd., a firm founded in 2014 and based in North China, according to online business directory Tianyancha.

According to its operating manual, the machine’s facial recognition camera scans users for three seconds before doling out toilet paper, and refuses to provide extra paper if users return within nine minutes of their first allocation.

A test report seen by Caixin shows that an inspection carried out between December 2019 and January 2020 concluded the device meets national standards and automatically deletes users’ facial data within a reasonable time frame.

Ji Chao, SoLine’s deputy manager, told Caixin that the company did not own the data, upload it to the cloud or hand it over to any third party. “We’re an environmental company, not a data company,” he said.