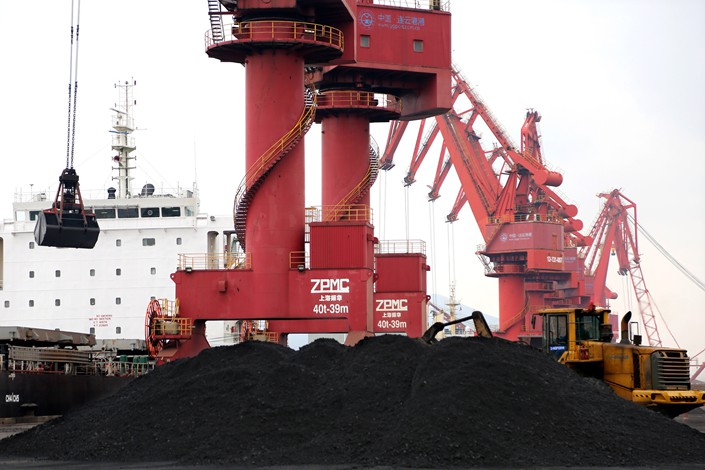 Coal is transported at a terminal in Lianyungang, East China's Jiangsu province, Dec. 13.

China’s top economic planer has attempted to cap soaring coal prices after they surged above a government-set limit as it seeks to shore up supplies to fuel the nation’s power stations amid ever tightening imports, state-backed Shanghai Securities News reported Monday.

The National Development and Reform Commission (NDRC) stipulated that coal purchase prices for power companies should not exceed 640 yuan ($97.7) per ton after summoning people from the country’s 10 top electricity utilities to a meeting on Saturday. The state planner also asked the companies to report to them if prices rise above the cap, saying it will “investigate the origins of high-priced coal,” said the report (link in Chinese) citing unidentified sources.

Despite the new cap, China’s thermal coal spot prices jumped to 659 yuan per ton on Monday, well above a previously government set “red zone” of 600 yuan and extending a 14-day rise on tight supply and peaking demand amid the winter heating season. Government restrictions on Australian coal and slow clearance of coal imports from Mongolia have also weighed heavily on supplies and driven up prices, said a report published by Zhongtai Securities on Monday.

Customs data show that in October, coal imports totaled 13.7 million tons, down 46.6% from a year earlier and representing a 26.5% drop from the previous month.

The NDRC stated in 2017 that it considered anything above 600 yuan a “red zone,” potentially triggering mechanisms to curb prices such as boosting supply from government reserves, lowering transport costs and strengthening oversight of long-term contract execution. An unidentified coal industry executive was cited by Shanghai Securities News as saying the new price cap had not yet been implemented.

Two domestic coal index compilers stopped updating daily coal prices at the beginning of this month, a practice that occurs when prices exceed the normal range. The NDRC has now required power operators to coordinate the supply of coal among their power plants, said Shanghai Securities News.

To avoid being viewed as intervening directly in the operation of the market, authorities in China sometimes convey guidance via phone calls or conferences without issuing formal notices. The top electricity utilities summoned by the NDRC to the meeting on Saturday included people from China Huaneng Group Co. Ltd., State Power Investment Corp. Ltd. and China Datang Corp. Ltd.

Domestic coal supply in China has also tightened as regulators increase safety inspections after a mine accident in the southwest municipality of Chongqing left 23 people dead earlier this month. As of Friday, stockpiles in Qinhuangdao port, one of the country’s busiest coal hubs, fell by nearly one-fifth to 492 tons from the same time last year.