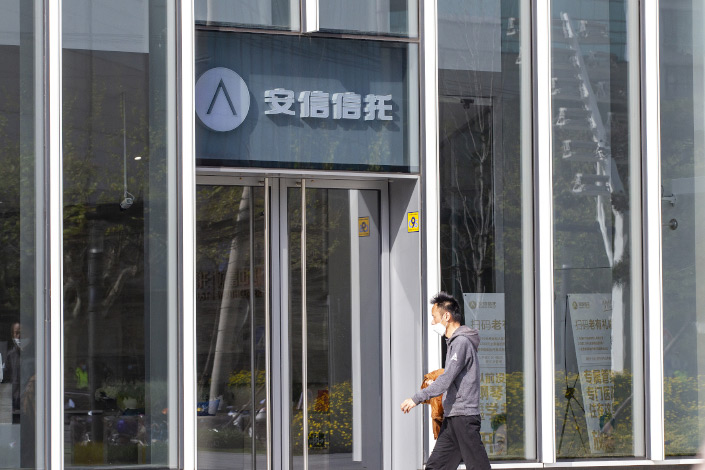 A man walks past an Anxin Trust office in Shanghai on April 7.

Anxin Trust Co. Ltd., once the darling of China’s trust industry, has escaped from immediately having to repay hundreds of millions of yuan to an investor after a court ruled that the agreements it signed with the state-owned enterprise (SOE) were invalid.

An appeals court in Central China’s Hunan province has ruled that two agreements Anxin Trust signed with an investor in one of its trust products, Hunan Expressway Group Finance Co. Ltd., could not be enforced because they illegally offered implicit guarantees, the trust company said in a statement (link in Chinese) Saturday.

Under the agreements, Anxin Trust had committed to paying the SOE, the finance arm of a local expressway construction company, at least 100 million yuan ($15.3 million) each quarter starting in May 2019.

Anxin Trust’s statement did not reveal the duration of the SOE’s investment in the trust product.

The decision overturned a lower court ruling that found in favor of Hunan Expressway Group Finance and ordered Anxin Trust to repay the principal of 400 million yuan, plus returns and penalties for breach of contract. In its ruling, the court suggested that an agreement requiring an investor be repaid a specific amount constituted an implicit guarantee and was therefore invalid. That got Anxin Trust off the hook of repaying the SOE under the supplementary agreements that are now ruled invalid.

In the latest ruling, the court cited judicial guidelines (link in Chinese) published in November 2019 that stipulated agreements with implicit guarantees on trust products should be ruled invalid.

In July, a banking regulator reiterated that trust products cannot provide guaranteed returns and should not make implicit guarantees.

Earlier this month, Anxin Trust said that a Shanghai court ruled in its favor and dismissed the claims of the two plaintiffs, both investors, who had demanded that Anxin Trust return the principal they had invested in one of its trust products.

Anxin Trust was once lauded as China’s most profitable trust company. That was before a 50 billion yuan financial black hole was discovered in its books. The firm was found to have illegally misappropriated the proceeds from trust products and created huge risks for itself by guaranteeing returns for some of its some investors, Caixin reported previously. The company illegally guaranteed returns for about 90 billion yuan in trust products, a source close to regulators said.

Such practices have made Anxin Trust the target in more than 50 company lawsuits involving roughly 25 billion yuan as of Dec. 25, mostly over broken investment guarantees, according to Caixin calculations based on public information released by the firm.

Last month, China overhauled regulations governing the country’s $3 trillion trust industry. The new rules, which will take effect on Jan. 1, stipulate stricter requirements (link in Chinese) for shareholders and managers of trust companies and tighten standards for those allowed to work in the investment business.