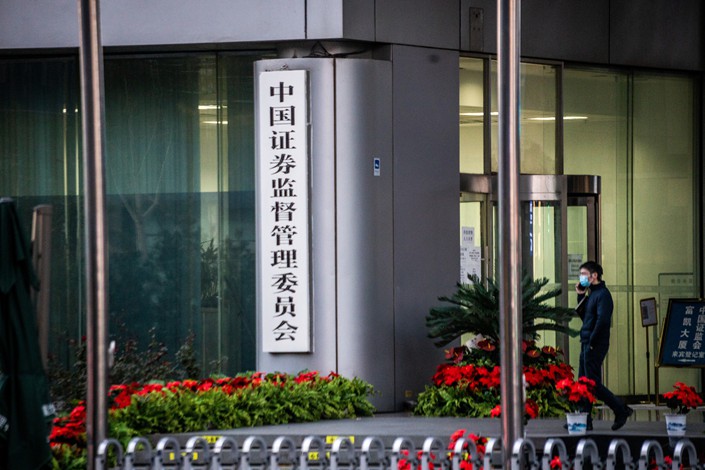 The Beijing headquarters of the China Securities Regulatory Commission.

The rules, which take effect May 1 next year, specify essential documents to be disclosed for issuing the bonds and major matters that issuers need to disclose during the term of a bond, according to a statement (link in Chinese) jointly released Monday by the country’s central bank, top economic planner and top securities regulator.

The rules are part of China’s broader efforts to unify management of its fragmented bond markets.

In November, 4.7 trillion yuan ($720 billion) worth of bonds were issued in China, including 1 trillion yuan in bonds issued by nonfinancial firms, data (link in Chinese) from the central bank showed.

The new rules “will help to enhance market transparency, improve market restraint mechanisms, strengthen investor protection mechanisms, improve the basic system of the bond market, and promote the sustained and healthy development of the market,” a government official said in a separate statement (link in Chinese) Monday.

The rules, finalized from a draft version (link in Chinese) released in December last year, stress there should be no false records, misleading statements, or major omissions in information disclosure, and companies should disclose information accurately and in a timely manner.

They require companies to issue a bond prospectus, disclose financial records for the past three years, as well as credit ratings reports and other material required.

The Monday statement also said companies need to disclose major events that may affect their solvency or impact investor interests. When such an event occurs, companies should disclose it to bondholders and explain the reasons and potential effects, it said.

The rules named more than 20 major events, including a major loss equivalent to more than 10% of net assets at the end of the previous year, and personnel changes in top management or controlling shareholders.

In addition, underwriters will be required to verify the accuracy of the bond prospectus, and ratings agencies required to issue timely credit ratings reports, especially when major events occur that could affect bond issuers’ solvency.

On Tuesday, China’s interbank bond market regulator announced a decision to ban China Chengxin from rating new interbank bonds for three months after an investigation into the agency and other financial intermediaries linked to Yongcheng. Sources told Caixin previously that Yongcheng was involved in “structured issuances,” a fundraising practice in which a company buys a portion of its own offerings to inflate issuance sizes and create a better image to attract investors.