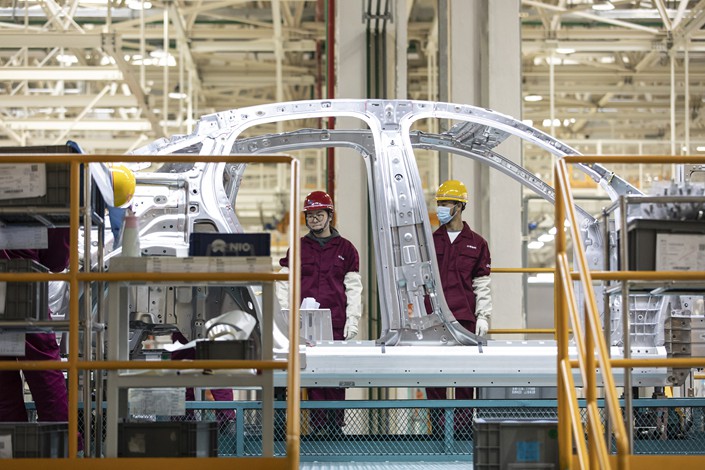 The health of China’s manufacturing sector continued to improve last month, though not quite as much as it had in the previous two months, a Caixin-sponsored survey showed.

The Caixin China General Manufacturing Purchasing Managers’ Index (PMI), which gives an independent snapshot of the country’s manufacturing sector, dipped to 53 in December from 54.9 the previous month, according to a report released Monday. November’s reading was the highest since November 2010.

A number above 50 indicates an expansion in activity, while a reading below that signals a contraction. The December reading marked the eighth consecutive month of expansion.

Wang Zhe, senior economist at Caixin Insight Group, said that the manufacturing industry continued to recover in December as the pandemic’s fallout on the domestic economy further subsided.

The survey, which was carried out between Dec. 4 and Dec. 14, showed that firms signaled slower, but still steep, expansions in output and total new work, while export sales rose modestly.

China’s export sector has been on the mend for several months, rising 21.1% in dollar terms in November from a year earlier, the fastest pace since February 2018.

Meanwhile, companies took a more cautious approach to hiring as growth in overall input costs accelerated, according to the survey. Broadly speaking, workforce numbers were unchanged.

Manufacturers in China registered a sharp increase in average input costs in December amid reports of higher raw material costs. Commodity prices continued to climb, with prices of industrial metals rising significantly, pushing the gauge for input costs to the highest since December 2017, Wang said. As a result, the gauge for output prices rose to the highest level since June 2018.

Manufacturers’ quantity of purchases and stocks of purchases continued to expand, though at a slower pace, while stocks for finished goods did not change much in December from the previous month.

Manufacturing companies maintained a positive outlook for their businesses over the next 12 months, with the gauge for future output expectations remaining comfortably above 50 and slightly higher than the long-term average.

“(W)e need to pay attention to the mounting pressure on costs brought by the increase in raw material prices and its adverse impact on employment, which is particularly important for the design of the exit from stimulus policies implemented during the epidemic,” Wang said.

Economists from Nomura International (Hong Kong) Ltd. estimated that Beijing could normalize monetary and fiscal policies next year by gradually withdrawing stimulus at a moderate pace, coupled with a modest slowdown in credit growth.

Read more
Year in Review: China’s Economy Gets Back on Track, but Faces Long Road Ahead